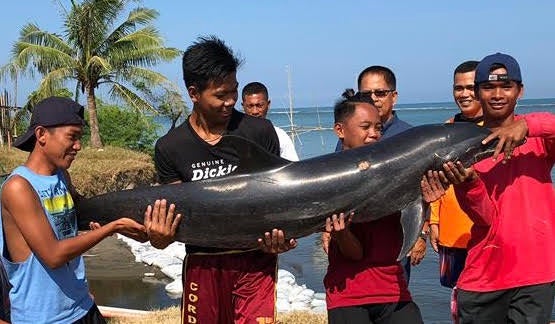 Fishermen carry the spotted dolphin that beached on Thursday, October 11, 2018, on the shore of San Fabian town in Pangasinan province. (Contributed photo)

DAGUPAN CITY — A wounded pantropical spotted dolphin (Stenella attenuata) was discovered at the shore of San Fabian town in Pangasinan province on Thursday but its rescuers could not save the marine animal.

The dolphin was found by fishermen at the beach of Barangay (village) Nibaliw Narvarte at about 7:30 a.m., according to Westly Rosario, chief of the National Integrated Fisheries Technology Development Center (NIFTDC).

The dolphin, which was 193 centimeters (cm) long, was the first of its kind to be stranded on Pangasinan shores, said Rosario.

The fishermen carried the dolphin to the NIFTDC but Rosario said the sea mammal did not survive the wound on its nape and died before it could be treated.

“Like the other dolphins that beached on our shores, the spotted dolphin appeared to have been wounded by a spear,” said Rosario.

The dolphin was buried at the NIFTDC fish cemetery, making it the 31st dolphin and the 39th sea animal to be entombed there.

Other sea animals buried in the cemetery are sea turtles and a whale. /kga

Read Next
Guess who stole the limelight on Day 1 of COC filing at Comelec?
EDITORS' PICK
WHO says monkeypox is not yet a health emergency
A massive highway complex makes living in the South highly attractive
Metro Manila logged most number of new COVID-19 cases — OCTA Research
Guarding Sara: Why next VP is getting own security team
Beyond the Chocolate Hills: A farm-to-table, heritage culinary adventure of Bohol
House energy committee chair Arroyo bats for cheap electricity
MOST READ
Leon Barretto steps up for sisters, asks dad Dennis Padilla: ‘Please stop resorting to public shaming’
LOOK: Rita Daniela pregnant with first child
Marjorie Barretto to speak up on Dennis Padilla, kids’ relationship ‘in time’
Bea Alonzo, under lie detector test, says she wants prenup agreement with future husband
Don't miss out on the latest news and information.