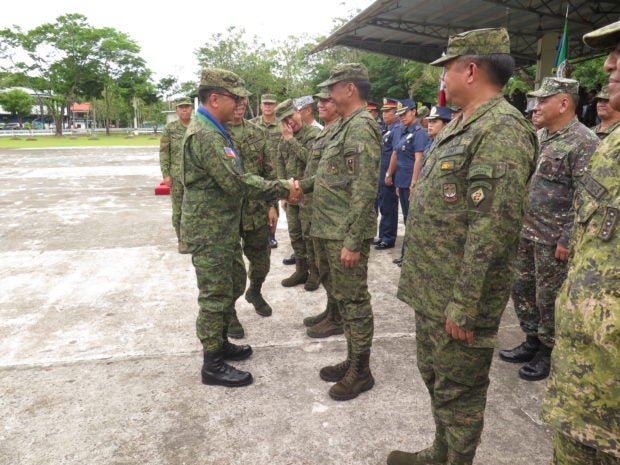 LUCENA CITY – With the start of the filing of Certificates of Candidacy (COC) for the midterm election next year, the top official of the Armed Forces Southern Luzon Command (Solcom) reminded politicians to adhere to the laws of the state and refrain from giving in to the demands of the New People’s Army (NPA) rebels for the payment of the so-called “permit to campaign” (PTC) fee.

“By making the mistake of giving in to the terrorists’ demands, they will be contributing to the terroristic activities of the enemy of the state, thereby endangering the lives of the people they are duty-bound to serve,” Lt. Gen. Danilo Pamonag, Solcom commander, said in a statement.

Pamonag warned candidates should not to pay PTC fees to NPA, or they might face legal sanction.

“Giving in and supporting terror organizations is punishable by law. A permit-to-campaign scheme is a form of extortion, which is illegal,” Pamonag said.

He said the payment of PTC fee will only allow the communist guerillas “to build-up war materials that will be used for terroristic activities against the Filipino people”.

Pamonag vowed that the military and police forces in Southern Tagalog and Bicol Regions will remain vigilant in the protection of and upholding the rights of the people.

“Once they give in (to NPA’s demands), it will not stop. They can’t win there,” stressed Maj. Gen. Rhoderick Parayno, commander of the Army’s 2nd Infantry Division covering Southern Tagalog.

On Thursday, politicians across the country have started to file their COCs to compete in the coming election on May 13, 2019. The COC filing will end by October 17. The election period will last from January 13, 2019 up to June 12, 2019.

Candidates vying for a seat at the House of Representatives as well as regional, provincial, city and municipal positions, their campaign period will be from March 30, 2019 to May 11, 2019.

Communist Party of the Philippines, in past statements, denied that NPAs are collecting PTC fees.

But in past elections, most candidates in Quezon province received communication from alleged communist guerillas asking them to settle their PTC fees in exchange for uninterrupted campaign activities inside areas that the rebels consider as their strongholds. /kga