Panelo is Duterte’s next spokesman 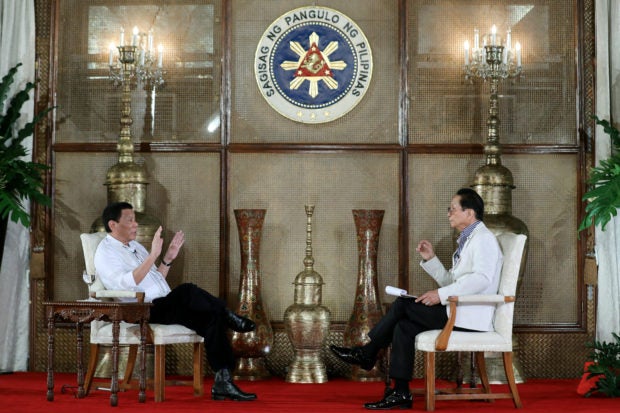 President Rodrigo Roa Duterte discusses the pressing concerns of the country during a dialogue with Chief Presidential Legal Counsel Salvador Panelo at the Malacañan Palace on September 11, 2018. VALERIE ESCALERA/PRESIDENTIAL PHOTO

“Concurrent,” Go told INQUIRER.net. This means that Panelo will still be the President’s principal legal counsel.

Panelo is set to start his job as presidential mouthpiece by next week, according to Go.

Panelo confirmed that he is the next Presidential Spokesperson.

In a text message, Panelo said, “Yes,” when asked to confirm about this additional task given to him by the President.

Sought for comment, Roque said in a text message that he’s not yet aware of this new development at the Palace.

“Not yet,” he told INQUIRER.net when asked if he was already informed that Panelo would be the next spokesperson of Mr. Duterte.

On Thursday morning, Roque denied speculations he already resigned from his post. This was two days after Duterte revealed that Roque threatened to resign after he was left in the dark about the Chief Executive’s hospital visit on October 3.

READ: Roque: I have not resigned

“I have not resigned,” he said in a text message to reporters.

Roque is believed to be eyeing a Senate seat in the 2019 midterm elections. But Duterte earlier advised him to forget about his Senate bid because he would not win since the military does not like him, and offered Roque to be his Press Secretary instead as the President wanted to revive the Office of the Press Secretary.

Roque, however, took the weekend to reflect and decide on whether or not to push through with his senatorial candidacy.

Asked Thursday if he has already made a decision about his Senate run, Roque said, “no decision.”