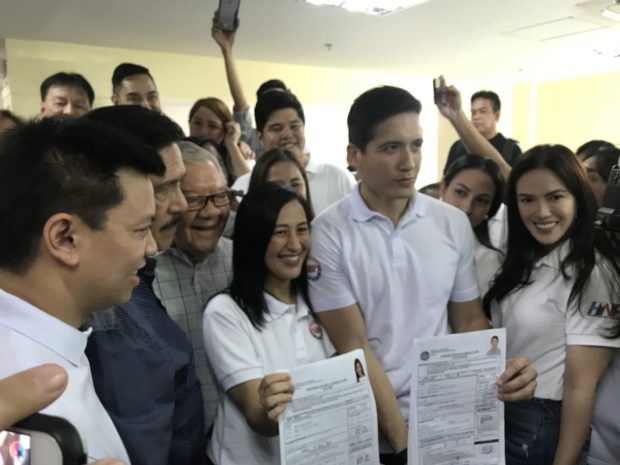 QC Vice Mayor Joy Belmonte and Councilor Gian Sotto (third and second from right) show their COCs after filing for their candidacies for mayor and vice mayor, respectively, before the Comelec in Quezon City on Thursday, Oct. 11, 2018. PHILIPPINE DAILY INQUIRER / JHESSET ENANO

Quezon City Vice Mayor Joy Belmonte filed her Certificate of Candidacy (COC) for the mayorship on Thursday before the Commission on Elections (Comelec) office in Quezon City.

Belmonte and Sotto will be running under Serbisyo sa Bayan Party, a regional party based in Quezon City which is allied with Hugpong ng Pagbabago party founded by Davao City Mayor Sara Duterte.

Meanwhile, Mikey Belmonte, a grandson of the former House Speaker Belmonte, also filed his COC for a councilor post in the city. /cbb