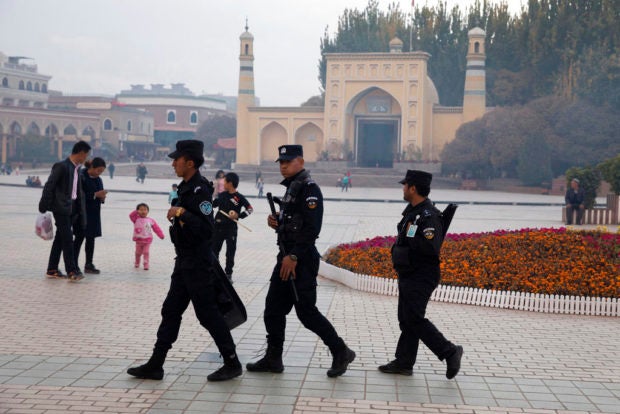 BEIJING — China’s far-northwestern region of Xinjiang has revised legislation to provide a legal basis for internment camps where up to 1 million Muslims are being held amid mounting international criticism.

New clauses adopted by the regional government officially permit the use of “education and training centers” to reform “people influenced by extremism.”

Chinese authorities deny that the internment camps exist but say petty criminals are sent to vocational “training centers.” Former detainees in the centers say they were forced to denounce Islam and profess loyalty to the Communist Party in what they describe as political indoctrination camps.

“It’s a retrospective justification for the mass detainment of Uighurs, Kazakhs, and other Muslim minorities in Xinjiang,” said James Leibold, a scholar of Chinese ethnic policies at Melbourne’s La Trobe University.

“It’s a new form of re-education that’s unprecedented and doesn’t really have a legal basis, and I see them scrambling to try to create a legal basis for this policy.”

The revisions, published Tuesday, say government agencies at the county level and above “may establish occupational skills education and training centers, education transformation organizations and management departments to transform people influenced by extremism through education.”

A new clause directs the centers to teach the Mandarin language and provide occupational and legal education, as well as “ideological education, psychological rehabilitation and behavior correction.”

The original legislation announced in 2017 banned the wearing of veils, “extreme speech and behavior” and the refusal to listen to public radio and television broadcasts.

Beijing has spent decades trying to suppress pro-independence sentiment in Xinjiang fueled in part by frustration about an influx of migrants from China’s Han majority. Authorities say extremists there have ties to foreign terror groups but have given little evidence to support that.

Members of Uighur, also spelled Uyghur, Kazakh and other Muslim minorities who live abroad say they have not been able to contact relatives in China, while authorities are placing children separated from their detained or exiled parents into dozens of state-run orphanages across Xinjiang.

Leibold believes that the revisions are an attempt to deflect international criticism. China has come under increasing pressure from the U.S. and the European Union after a United Nations panel confronted Chinese diplomats in August over reports of arbitrary mass detentions and harsh security measures aimed at Muslims, and China is up for review by the U.N.’s Human Rights Council in November.

“Regardless of these revisions, I still believe the practice of coercively detaining Uyghurs and other Muslim minorities in Xinjiang in “education through transformation centers” not only violates Chinese law but also international legal norms against the extrajudicial deprivation of liberty,” Leibold said. /ee