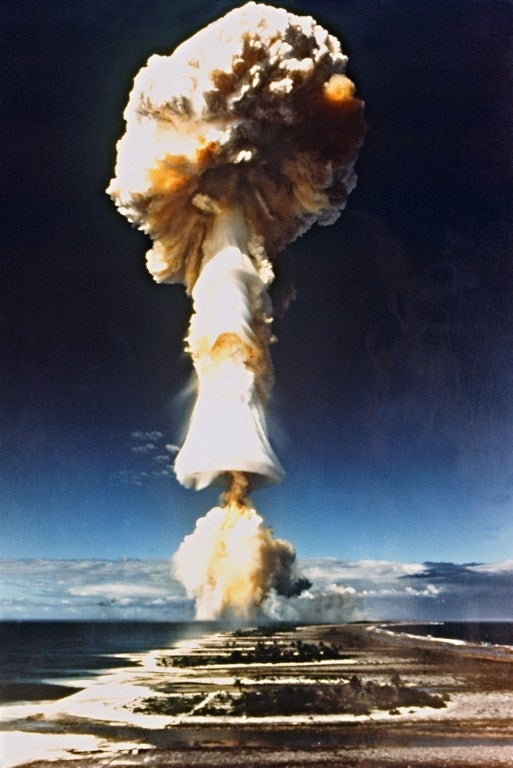 This picture taken in 1970 shows a French nuclear test at Mururoa, French Polynesia. Researchers have established a link between France’s nuclear tests over the Pacific ocean in the late 1960s and the high incidence of thyroid cancer in Polynesia. France carried out some 40 atmospheric atomic tests in Polynesia from 1966 to 1974. After that its tests were carried out underground. AFP FILE

UNITED NATIONS, United States – A complaint has been filed at the Hague-based International Criminal Court against France for alleged crimes against humanity over nuclear tests conducted in the South Pacific, a French Polynesian opposition leader said on Tuesday.

“It’s with a great sense of duty and determination that we filed a complaint at the International Criminal Court on October 2 for crimes against humanity,” Oscar Temaru, who is also the French archipelago’s former president, said at the United Nations.

“This case aims to hold all the living French presidents accountable for the nuclear tests against our country.”

Speaking during a meeting about French Polynesia as part of a UN committee focused on decolonization, he said: “We owe it to all the people who died from the consequences of nuclear colonialism.”

The overseas French territory, with about 290,000 people, is best known nowadays for its tourist island of Tahiti.

But its Mururoa and Fangataufa atolls saw 193 nuclear tests over three decades until then-president Jacques Chirac ended the program in the 1990s.

The French Polynesia tests were among a total of 210 carried out — also in Africa’s Sahara desert — with about 150,000 civilian and military personnel between 1960 and 1996.

Only around 20 of approximately 1,000 people who filed complaints against France have received compensation.

“We see French nuclear tests as no less than the direct result of colonization,” Temaru said, adding the testing was imposed upon the islanders “with the direct threat of imposing military rule if we refused.”

Temaru, who favors independence, said France has “ignored and shown contempt” for repeated offers since 2013 to come to the table under UN supervision.

France long denied its responsibility for the health and environmental impacts of its testing, out of fear the admission would weaken its nuclear program during the Cold War.

Only in 2010 did France pass a law authorizing compensation for military veterans and civilians whose cancer could be attributed to the test program. /cbb