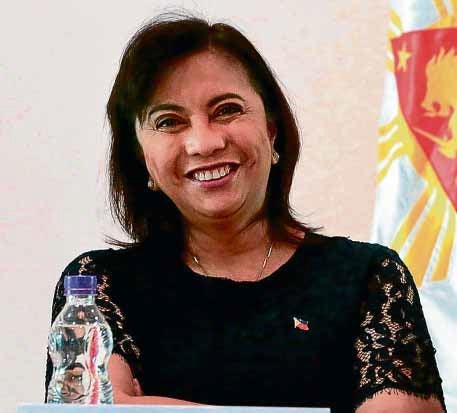 Senators have rejected a House of Representatives proposal to remove the Vice President from the line of succession to the presidency during the transition to federalism, describing the move as an attempt to entice the Senate to jump on the charter change bandwagon.

“Charter change” is a code word for revision of the Constitution, a House priority that senators have dismissed as “dead on arrival.”

“[Vice President Leni] Robredo, having been elected and proclaimed winner of the 2016 elections, deserves to stay second in the line of succession,” said Sen. Panfilo Lacson, who branded the proposal as bait for the Senate leadership.

“It is a desperate attempt to lure the Senate through [Senate President Vicente] Sotto to bite the bait,” Lacson said on Tuesday, referring to the draft federal Constitution being pushed by Speaker Gloria Macapagal-Arroyo and her allies who are proposing to make the Senate President the President’s direct successor.

The House move appears to run in line with the wishes of President Duterte, who has repeatedly questioned Robredo’s competence in public.

Robredo is chair of the opposition Liberal Party.

“This is simply a blatant power grab by discredited politicos, who would rather play politics to advance their selfish interests than do actual work to help our fellow Filipinos,” Gutierrez said.

Leyte Rep. Vicente Veloso, chair of the House committee on constitutional amendments, denied the proposal was a power grab.

He said the transitory provision was meant to deal with the “uncertainty” about the vice presidency created by former Sen. Ferdinand Marcos’ protesting Robredo’s electoral victory.

Veloso, a former Court of Appeals justice, said the Presidential Electoral Tribunal might rule in favor of Marcos next year and then, on Robredo’s appeal, rule in her favor the following year.

“Can we submit this republic to that uncertainty? In the first place, we have not named names here. It is very presumptive for anybody to say we are taking a power grab. Are we even sure that it is Robredo who is the Vice President?” he said.

Sotto, who would benefit from the provision, said there was simply no way to discuss the House proposal in the Senate due to time constraints.

Without stating whether he supported or objected to the transitory provision, Sotto said in a text message: “You don’t even have to delve into that because there is no ample time to even talk about it.”

“We can talk about their ideas after the 2019 elections,” he said.

Lacson said Sotto was “too smart not to see through the scheme” of the House leaders.

“The long and short of the House effort is, it won’t fly,” he said.

Senate Minority Leader Franklin Drilon said that for all intents and purposes, Charter change was dead.

“There is no time. That alone will kill the measure. It is dead on arrival,” Drilon told reporters.

“With all due respect to our colleagues in the House, we have no time. We have the budget coming up, so for the whole November and December we will be discussing and approving the budget,” Zubiri said.

“And then in January there’s not enough time to discuss important measures such as [Charter change], since we only have one month before the start of the campaign … then we have a long break, almost 100 days, from February to May, so practically there will be no time,” Zubiri said.

“Practically we can discuss this in the 18th Congress,” he added.

Opposition lawmakers in the House also slammed the proposal.

“This is really flawed and errant. It also short-circuits the legitimate succession of power in the presidency,” Albay Rep. Edcel Lagman said.

Akbayan Rep. Tom Villarin said the proposal was obviously intended to prevent Robredo from taking over the reign of government even during the transition to federalism.

“Because [Robredo] is in the opposition, the administration has to take her out of the equation in the transitory provision for succession before the supposed draft Charter takes effect in 2022,” Villarin said. —With reports from Melvin Gascon, Marlon Ramos and Jerome Aning