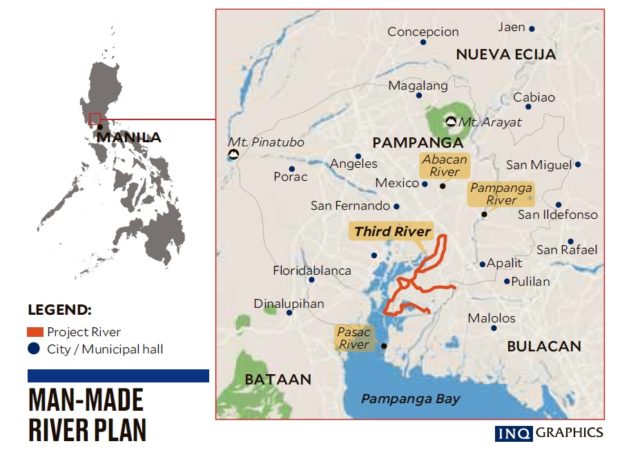 CITY OF SAN FERNANDO — A 33-kilometer artificial river will be built by the Department of Public Works and Highways (DPWH) with an $80.5-million loan from South Korea, to ease flooding in the southern part of Pampanga province.

Construction for the man-made tributary, called the Third River, was scheduled to begin on Tuesday, after Public Works Secretary Mark Villar and Speaker Gloria Macapagal-Arroyo inaugurated the project.

The Third River, which was attributed to a concept made by Pampanga Rep. Emigdio Bondoc before he died in a car accident in 1997, is designed to drain water coming from the Pampanga and Pasac rivers.

The two major river systems drain into the Manila Bay, according to Rogelio Ong, head of the flood control office of the DPWH in Central Luzon.

The man-made river will connect the Bungang Ginto River in the towns of Mexico and San Simon; Caduang Tete River in Macabebe town; and Sapang Maragul River in Masantol town.

The flooding prompted Gov. Lilia Pineda to ask the DPWH to desilt the mouth of the 265-km Pampanga River that originates from Nueva Ecija province.

Pampanga serves as Central Luzon’s main drainer of runoff water that flows out to Manila Bay.

The project is part of measures to mitigate the effects of Mt. Pinatubo’s eruptions 27 years ago, said Undersecretary Emil Sadain, operations chief of the DPWH unified project management office.

The project will involve the relocation of families, but Villar said “the displacement will be very minimal [and] the benefits will be very huge.”