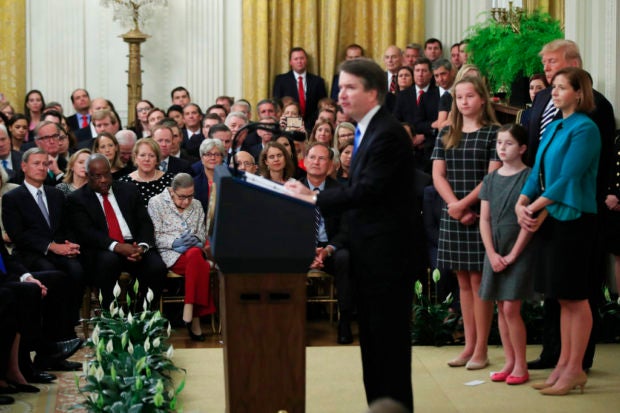 President Donald Trump, Chief Justice John Roberts, back left, and justices of the Supreme Court, listen to Justice Brett Kavanaugh speak during the ceremonial swearing-in ceremony of Kavanaugh as Associate Justice of the Supreme Court of the United States in the East Room of the White House in Washington on Oct. 8, 2018. AP

WASHINGTON — People hoping to see Justice Brett Kavanaugh’s first day on the Supreme Court bench are waiting in long lines outside the court. Police barricades are up in front of the court, but the few protesters on hand are congregating near the garage where the justices enter.

Protesters held signs that said, “We will not forget” and “We do not consent,” following the acrimonious fight that culminated in Kavanaugh’s 50-48 confirmation by the Senate on Saturday.

The new justice said Monday that his two daughters are expected to be in the courtroom Tuesday as their father and his new colleagues were hearing arguments.

Kavanaugh is about to hear his first arguments as a Supreme Court justice.

The high court is hearing two hours of arguments Tuesday beginning at 10 a.m. It will be the first time Kavanaugh joins his eight colleagues to hear a case.

Kavanaugh was confirmed 50-48 Saturday after a bitter Senate battle. He took his oaths of office in a private ceremony at the Supreme Court on Saturday evening. And on Monday evening he participated in a ceremonial swearing-in ceremony at the White House.

Republicans had hoped to confirm Kavanaugh in time for the court’s Oct. 1 start of the new term. But Kavanaugh’s confirmation was delayed as the Senate considered allegations that he had sexually assaulted a woman in high school. Kavanaugh denied those allegations. /ee