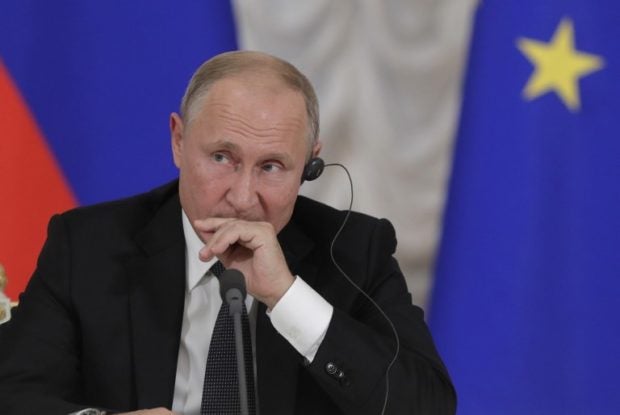 SAINT PETERSBURG, Russia – A Russian court sentenced three men to up to 15 days detention Monday over a protest in Saint Petersburg where activists carried a banner wishing “many years of jail” to President Vladimir Putin on his birthday this weekend.

The Saint Petersburg protest was one of a number held in Russian cities at the weekend aimed at coinciding with Putin’s 66th birthday on Sunday.

The Russian city’s Dzerzhinsky court sentenced Andrei Graf to 15 days, and Ivan Rubtsov and Vladislav Ivancho to 10 days, the court said in a statement.

The three men are linked to a movement called Vesna (Spring), which held a protest in the city center where demonstrators carried smoke flares and a big banner that read “Many years of jail,” meant to be a message for Putin.

Vesna said on its VK social network page that Graf and Rubtsov were not participating in the protest but were watching it from the pavement.

“With this action we want to remind how many people have been killed and repressed over the 18 years of Vladimir Putin’s rule,” Vesna said, listing several names, including the slain journalist Anna Politkovskaya, whose murder happened on Putin’s birthday in 2006 and remains unsolved.

In Kazan on the Volga river, activists on Sunday hung a banner from a bridge saying “Happy Birthday, liar and thief”.

Most of those detained Sunday were released without jail time. /cbb