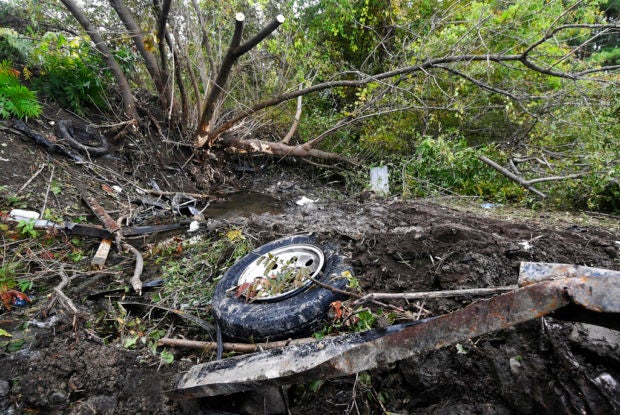 Debris scatters an area Sunday, Oct. 7, 2018, at the site of the crash in Schoharie, New York, where 20 people were killed when a limousine carrying people to a birthday party crashed into a parked vehicle. AP

NEW YORK, United States – Twenty people have been killed after a limousine careened out of control in what investigators described Sunday as the most deadly transportation accident in the United States for nearly a decade.

He said the 2001 Ford Excursion failed to stop at an intersection and continued into a parking lot, ultimately crashing into a parked car. Investigators have not yet established if the victims were wearing seatbelts.

“Twenty fatalities is horrific… This is one of the biggest losses of lives that we have seen in a long, long time,” added National Transportation Safety Board (NTSB) chairman Robert Sumwalt.

“This is the most deadly transportation accident in the country since February of 2009,” he added — referring to the Colgan Air Flight crash from New Jersey to New York, which killed 49.

Pictures posted on Twitter by Jesse McKinley, the Albany bureau chief for the New York Times, showed a hair brush and a fragment of tail light in the grass at the side of the road, in the aftermath. Deep muddy tire tracks disappeared into woodland beyond.

The tragedy unfolded outside the Apple Barrel Country Store and Cafe in the town of Schoharie, southwest of the state capital Albany and a three-hour drive north of New York City.

“That limo was coming down that hill probably over 60 mph… I don’t want to describe the scene. It’s not something I want to think about,” manager Jessica Kirby was quoted as saying.

The Columbus Day weekend is the busiest of the year for the store, Kirby told the paper, noting that it was full of customers from New York City, New Jersey and Albany at the time of the crash.

‘I heard some screaming’

A witness named by local media as Bill Waterson said the limousine was carrying a party on their way to a wedding reception, although this was not confirmed by police.

“I heard some screaming. It looked serious because people were running back and forth,” a witness identified as Bridey Finegan told local NBC affiliate WNYT.

Road accidents are the fourth leading cause of injury related deaths in New York state, according to federal health statistics.

In 2014, the latest year with available figures, crashes on the state’s highways resulted in $808.1 million in hospitalization and emergency department charges, the Department of Health says on its website.

The Apple Barrel, a popular stop for tourists viewing fall foliage in the area, posted a message on its Facebook page lamenting the “horrific accident.”

It said it would be open for business on Sunday and “hope you will come and share your smiles, love, friendship and hugs with us.” /cbb