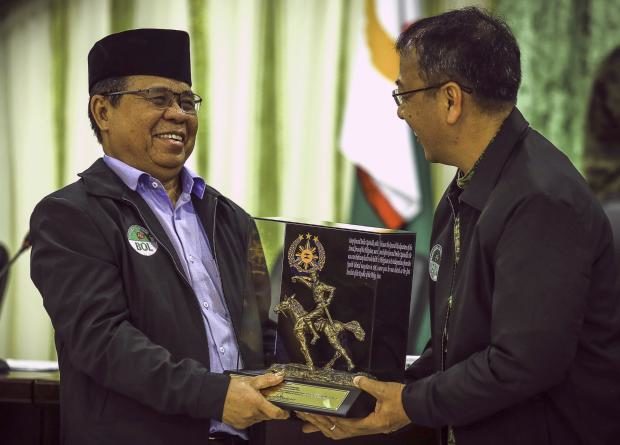 Gen. Carlito Galvez Jr., chief of staff of the Armed Forces of the Philippines, visited the MILF’s Camp Darapanan in Sultan Kudarat, Maguindanao province, on Saturday to make the declaration, ending a decadeslong conflict that had cost thousands of lives and impoverished resource-rich Mindanao.

To campaign for BOL

Galvez also promised to campaign for ratification of the Bangsamoro Organic Law (BOL) after his retirement in December.

Passed by Congress and signed by President Duterte in July, the BOL would establish an expanded autonomous region for Muslim in Mindanao.

The peace deal led to the passage of the BOL, which would be submitted to the people of Mindanao for approval in referendum in January.

Galvez served as chair of the government ceasefire panel, helping to defuse tensions between the military and the rebels during the negotiations for a peace agreement.

“Today I came back to one of the most revered place[s], a place I can call home because here live those gallant men I consider my brethren, those whom I have been working with for a peaceful Mindanao,” Galvez said.

“This visit represents the degree of progress we have made over the years in bringing significant cooperation and avoiding confrontation among us Filipinos,” Murad said.

“I will not forget that I was given so much importance . . . that was the longest honor given to me and probably in the history of giving honors to visiting guests,” he added.

“I will help in the challenges facing the BOL. We will solve it. Together we will make it happen,” he added. —With a report from Edwin Fernandez