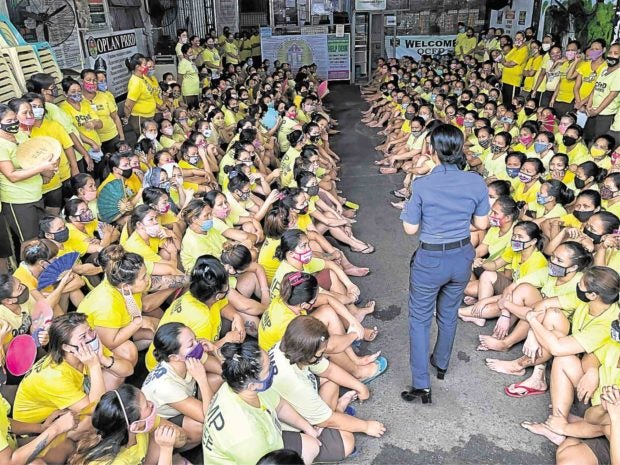 LIMITED SPACE More than a thousand women are sharing space at the Quezon City Female Dormitory in Camp Karingal, which ideally houses only 90. Jail population swelled rapidly after the Duterte administration launched its antidrug campaign in 2016. —JHESSET O. ENANO

When the sun is high, the air turns heavy in the Quezon City Female Dormitory (QCFD), where more than a thousand women share space in a jail that can house only 90.

For a group of nine women, however, it is their turn to step out of their “dorms” to a relatively open area just behind the jail’s tall concrete walls.

For a few minutes, they breathe in and out deeply — hands on their knees, and index fingers and thumbs forming small circles.

Led by one of the jail officers — a public servant, social worker and now yoga teacher rolled into one — the women in yellow shirts sit in meditative poses.

Instead of yoga mats, they have to make do with “banig,” or woven sleeping mats.

After a couple of stretches, the session is cut short. It’s noon and women, coming in pairs, begin to flood the limited open area, this time for the daily head count.

In the morning, there are exercises, livelihood activities and Bible study; in the afternoon, family members visit the detainees.

Despite the congestion that in the country often bears a male face, female detainees suffer a similar plight.

For QCFD detainees and personnel, hope lies in a soon-to-rise facility, which jail officials expect will reduce the congestion by half.

“Whatever programs we want to implement, if we do not have the adequate space and proper structure, we cannot properly put them in place,” she said.

At present, the QCFD congestion rate is 1,014 percent.

Laguyo said the jail population rapidly swelled after the Duterte administration launched its antidrug campaign in 2016. At least 90 percent of the female detainees face drug-related charges.

In 2017, the population soared to more than 1,200 women, who stayed in a two-story facility that was divided into three “dormitories.”

Due to the lack of space, there are no proper cells. Detainees are allowed to move around inside their assigned dorms and between wooden bunk beds.

With no mess hall, they eat their meals inside their dorms as well.

Almost all women wear cloth masks in an attempt to curb the spread of certain illnesses.

A makeshift structure was built near the open area for an improvised clinic in order to accommodate the women’s needs, particularly those of the pregnant ones.

Detainees receive free medicines and provisions for hygiene, such as sanitary pads.

Change is expected to come by January, with the completion of the P58-million facility, just beside the existing one.

The project, which began in November last year, is being built with funds from the Quezon City government.

The four-story building is expected to accommodate more than 600 detainees. It will have 15 additional cells that can ideally house 20 people each.

The new facility, which would occupy around 1,500 square meters, will have a multipurpose hall, canteen and laundry area.

Detainees can look forward to a medical clinic and an isolation room for those with communicable diseases.

In the present building, those with infectious diseases, such as tuberculosis, are temporarily isolated in a small room. Its walls are covered with plastic to prevent the spread of airborne illnesses.

Laguyo said that with the new facility, the jail administration may be able to properly segregate the inmates.

“Right now, our segregation is according to cases,” she said. “But with the additional facility, we can segregate those who are mentally challenged and those with contagious diseases, for instance.”

Pregnant women would also have their own space.

With a new building, Laguyo said she would consider turning the existing structure into a livelihood area, which could bolster skills training programs, such as candle-and soap-making and massage.

She said the old facility could also be made into a conducive area for female detainees studying under the Department of Education’s Alternative Learning System.

Despite the challenging conditions, Laguyo said order was being maintained at the QCFD.

For this year, it was recognized as the best jail for women in Metro Manila by the Bureau of Jail Management and Penology.

Gangs are forbidden and no riots have been recorded, save for some occasional yelling and hair-pulling between some detainees.

While the male detainees of the Quezon City Jail look forward to a new facility in Payatas, their female counterparts are not certain whether they would be transferred to the same location.

The QCFD shares space with the Quezon City Police District headquarters at Camp Karingal on land leased from the University of the Philippines in Diliman, Quezon City.

For now, Laguyo said she was looking forward to better conditions for both the female detainees and jail personnel.

“Personally, as of this moment, it would be all right if we stay here, since we already requested a facility to improve our own programs,” she said.