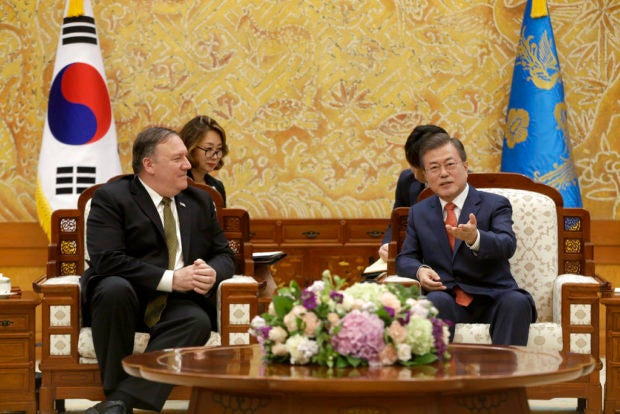 South Korean President Moon Jae-in (right) talks with US Secretary of State Mike Pompeo during a meeting at the presidential Blue House in Seoul, South Korea on  Oct. 7, 2018.  AP

SEOUL, South Korea  — US Secretary of State Mike Pompeo said that he and North Korean leader Kim Jong Un made unspecified progress Sunday toward an agreement for the North to give up its nuclear weapons.

But there was no immediate indication whether Pompeo had managed to arrange a much-anticipated second summit between Kim and President Donald Trump.

Arriving in Seoul after several hours in Pyongyang on his fourth visit to North Korea, Pompeo tweeted that he had a “good trip” and that he and Kim “continue to make progress on agreements made at Singapore summit.” Trump and Kim held a historic summit there in June that resulted in a vague agreement for the North to denuclearize.

The top US diplomat offered no details, and upon landing in South Korea, he briefed White House national security adviser John Bolton and Trump chief of staff John Kelly on his trip, officials said.

Pompeo, on the third stop of a four-leg Asian tour that began in Japan and was to end in China on Monday, then met South Korea’s president, Moon Jae-in. Moon, who has met twice with Kim, asked Pompeo to make public as much information as he could about the trip.

“I dearly hope that your latest visit, as well as the upcoming U.S.-North Korea summit, which I hope will be happening soon, will make an irreversible, decisive progress in terms of the denuclearization as well as the peace process,” Moon said. “Since we have the media present here, I would like to ask you to disclose anything that you can open to the public here.”

“I will certainly tell you in private about our conversation, but we had a good, productive conversation,” Pompeo said. “As President Trump said, there are many steps along the way and we took one of them today. It was another step forward. So this is, I think, a good outcome for all of us.”

In Pyongyang, Pompeo and Kim met for about 3 1/2 hours, first in a business session and then in a 90-minute luncheon that the North Korean leader hosted at a state guesthouse, according to the pool report from the lone US journalist allowed to accompany Pompeo on his Asia trip.

“It’s a very nice day that promises a good future for both countries,” Kim told Pompeo through an interpreter as they sat down for the meal.

“Yeah, so we had a great, great visit this morning,” Pompeo replied. “Thank you for hosting, President Trump sends his regards. And we had a very successful morning so thank you and I am looking forward to our time here at lunch as well.”

On the North Korean side, Kim was joined at the lunch by his sister, Kim Yo Jong, and his former intelligence chief Kim Yong Chol, who has been Pompeo’s chief interlocutor.

Aside from Pompeo, the U.S. side included Stephen Biegun, the new U.S. special envoy for North Korea, and Andrew Kim, who heads a Korea working group at the CIA that Pompeo set up while he was running the agency.

Pompeo and Kim had exchanged pleasantries and appeared chummy while they walked into the banquet room. “It’s good to see you again,” Pompeo said as they shook hands. Pompeo placed his hand on Kim’s shoulder and they both smiled.

“So is everything OK?” Kim asked Pompeo.

Other members of the two delegations ate their five-course meal, which included delicacies such as foie gras, conch soup, steak, grilled pine mushrooms and chocolate cake, sweet red wine and soju, in a separate room.

Pompeo had planned to meet with Kim on Sunday’s trip, but North Korean officials said Kim’s participation in the luncheon had not been expected. Pompeo had not met with Kim on his last visit and Trump had abruptly canceled Pompeo’s plans to travel to North Korea last month, citing a lack of progress in the negotiations

Pompeo earlier held talks in Tokyo with Japan’s prime minister, and pledged that the Trump administration would coordinate and unify its strategy for denuclearization with its allies. Japan has been wary of the initiative, but South Korea has embraced it.

Pompeo has repeatedly refused to discuss details of negotiations, including a US position on North Korea’s demand for a declared end to the Korean War and a proposal from Seoul for such a declaration to be accompanied by a shutdown of the North’s main known nuclear facility.

The US and Japan have pushed for the North to compile and turn over a detailed list of its nuclear sites to be dismantled as a next step in the process. The North has rejected that.

Since the denuclearization effort got underway with a secret visit to the North by then-CIA chief Pompeo in April, there has been only limited progress, even since the June 12 Trump-Kim summit that many had hoped would jump-start the effort.

North Korea so far has suspended nuclear and missile tests, freed three American prisoners and dismantled parts of a missile engine facility and tunnel entrances at a nuclear test site. It has not taken any steps to halt nuclear weapons or missile development.

The North has accused Washington of making “unilateral and gangster-like” demands on denuclearization and has insisted that sanctions should be lifted before any progress in nuclear talks. US officials have thus far said the penalties will remain in place until the North’s denuclearization is fully verified. /ee