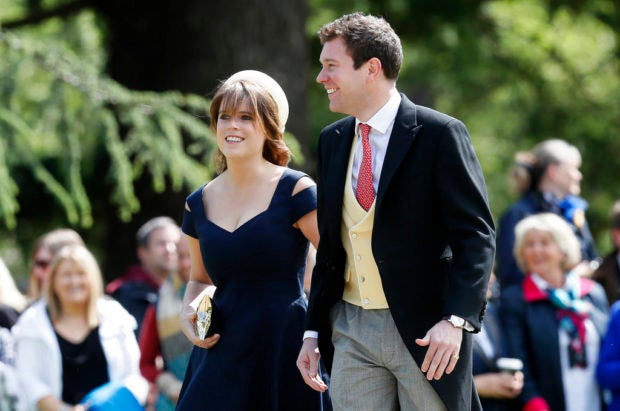 In this May 20, 2017 file photo, Britain’s Princess Eugenie and Jack Brooksbank arrive for the wedding of Pippa Middleton and James Matthews at St Mark’s Church in Englefield, England. AP

LONDON —There will be military fanfare and red velvet cake when Princess Eugenie weds this week — Britain’s second royal wedding of the year.

The 28-year-old granddaughter of Queen Elizabeth II is due to marry liquor company executive Jack Brooksbank on Friday in St. George’s Chapel at Windsor Castle.

Prince Harry, her cousin, and American actress Meghan Markle married at the same venue in May.

Buckingham Palace said Sunday that Eugenie’s service will feature a trumpet fanfare and Scottish pipers, a performance by Italian singer Andrea Bocelli and a prayer written by Archbishop of York John Sentamu.
London baker Sophie Cabot is making the red velvet-and-chocolate wedding cake, billed as “a traditional cake with a modern feel.”

The younger daughter of Prince Andrew and his ex-wife Sarah Ferguson, Eugenie is ninth in line to the British throne. /ee