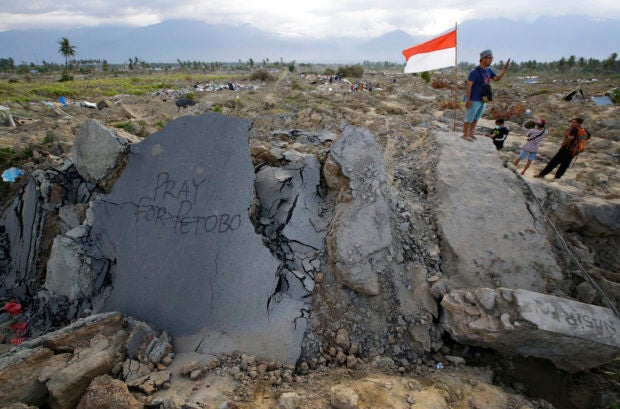 A sign “Pray for Petobo” is placed on a piece of a road on Saturday Oct. 6, 2018 after it moved when earthquake hit Petobo neighborhood in Palu, Central Sulawesi, Indonesia last week.  AP

PALU, Indonesia —  Indonesia’s disaster agency says the death toll from the earthquake and tsunami that struck Sulawesi island has risen to 1,763, with more than 5,000 feared missing.

He provided the updated figure Sunday at a news conference in Jakarta.

Christians dressed in their tidiest clothes are flocking to Sunday sermons in the earthquake and tsunami damaged Indonesian city of Palu, hoping for answers to the double tragedy that inflicted deep trauma on their community.

Protestants, Catholics and Charismatics make up about 10 percent of the population of Palu, where neighborhoods and miles of coastline were obliterated by the Sept. 28 quake and tsunami.

Min Kapala says she came to the city of more than 25 churches from an outlying area because her usual house of worship was destroyed.

Lucky Malonda, the pastor at a protestant church in Palu, says the intensity of the disaster had taken even scientists by surprise and called it the will of God. /ee