Protesters rage in Washington as Kavanaugh is confirmed 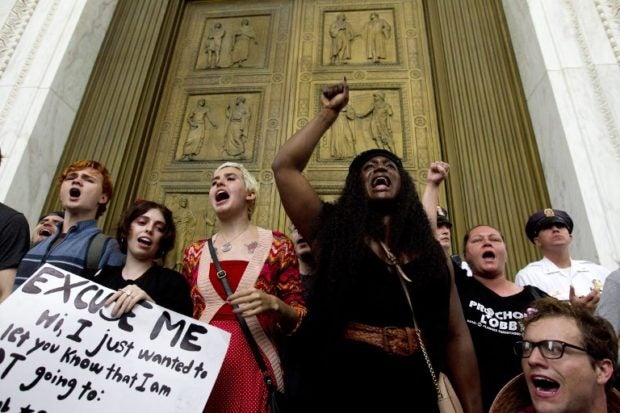 Demonstrators block the main entrance door as they take the steps of the US Supreme Court to protest against the appointment of Supreme Court nominee Brett Kavanaugh in Washington DC, on October 6, 2018. / AFP PHOTO / Jose Luis Magana

Two of America’s hallowed institutions, the US Capitol and the Supreme Court, became a nexus of public rage and frustration Saturday as President Donald Trump got his controversial nominee Brett Kavanaugh confirmed onto the high court.

Protesters swarmed Washington, and rushed the steps of the Supreme Court to bang loudly on its bronze doors around the time Kavanaugh was set to be sworn in inside.

“This is our court, these are our steps, these are our institutions!” proclaimed Jessica Campbell-Swanson, 35, to AFP just after raising a defiant fist and then coming down from the lap of the large marble Contemplation of Justice statue in front of the Supreme Court.

Hundreds of her compatriots chanted and waved anti-Kavanaugh placards — one read “This ain’t over” — as dozens of officers pushed them back from the doors and then stood guard.

After a week of deep anxiety in Washington and nationwide, tensions surged about Kavanaugh, who stands accused of sexual misconduct.

Several hundred protesters, most of them women, barged through barricades to lay claim to the front steps of the US Capitol.

Dozens were arrested as they and others chanted “Vote them out!” and “No justice, no seat!”

Protesters also disrupted the vote itself in the US Senate multiple times before being dragged from the public galleries, yelling “Coward!” at lawmakers who backed Kavanaugh.

When Vice President Mike Pence, who presided over the vote, exited the Senate, he was loudly booed and heckled by onlookers outside until he ducked into his limousine.

The confirmation of Kavanaugh has come in the midst of a MeToo movement that has put sexual assault squarely in a cultural crosshairs.

And it has prompted several assault survivors to take up the protest banner.

“I am here because President Trump mocked sexual assault victims,” said North Carolina native Kara Harrington, 50, as she held a sign that read “Shame,” and stood with her daughter and husband in front of a police cordon on the court steps.

“It unleashed something inside me. I was assaulted when I was younger and I didn’t tell anybody,” she added.

But she also spoke of the country’s bitter divisions, and how American politicians and the Trump administration have done little to douse the flames.

“We have a separation of powers that doesn’t exist any more, and it’s very scary,” she said.

“And I’m horrified that we can’t seem to have any kind of middle ground or common sense.”

Across the street from the Supreme Court, a man wearing a “Trump 2020” shirt took in the scene.

Chuck Thompson, 41, said he and his wife recently traveled from Georgia to visit Washington on their 20th wedding anniversary, and found a city heaving in protest.

But he scoffed at the idea that Kavanaugh’s nomination, and the tumult it has unleashed, will help Democrats in November’s midterm elections.

“This whole thing is going to backfire,” he said.