President Rodrigo Duterte said he was assuming responsibility for rising inflation, which hit 6.7 percent in September, and his spokesperson said the administration was doing everything to deal with increasing prices of commodities.

The rate of increase in prices of basic commodities last month was the fastest since the headline inflation rate of 7.2 percent in posted in February 2009, according to Philippine Statistics Authority (PSA) data.

A day before the PSA announced the new inflation figures, President Duterte already blamed rising inflation on the hikes in the price of imported oil.

“There’s nothing else I can say. But I assume responsibility for the rising prices because I am here. I am the worker assigned here to answer for all those things,” he told members of the Philippine Military Academy Alumni Association in Malacañang on Thursday night.

Presidential spokesperson Harry Roque said the government was “doing all we can” to deal with the rising prices of commodities, including importing food.

Analyst Astro del Castillo said the inflation problem “will not be solved overnight” because some factors were beyond the government’s control, such as oil prices. Global crude prices are sitting at a four-year high around $85 and there are warnings it they could break $100.

However, the people expect the president to do something about it, Del Castillo told the French news agency Agence France Presse.

“You’ve seen the (opinion) surveys. The people would like inflation to be the government’s top priority,” he added.

Labor groups are pushing the government to firmly address the rising prices of goods especially those purchased daily by ordinary Filipinos.

Sentro secretary general Josua Mata said that instead of “chasing phantoms,” in light of the so-called “Red October” plot to oust Mr. Duterte, the President should have focused his time and energy on improving the economy.

The Associated Labor Unions-Trade Union Congress of the Philippines (ALU-TUCP) said that even if the government has approved wage hikes from P9 to P56 in most parts of the country, these were “unjustly so small and inadequate.” 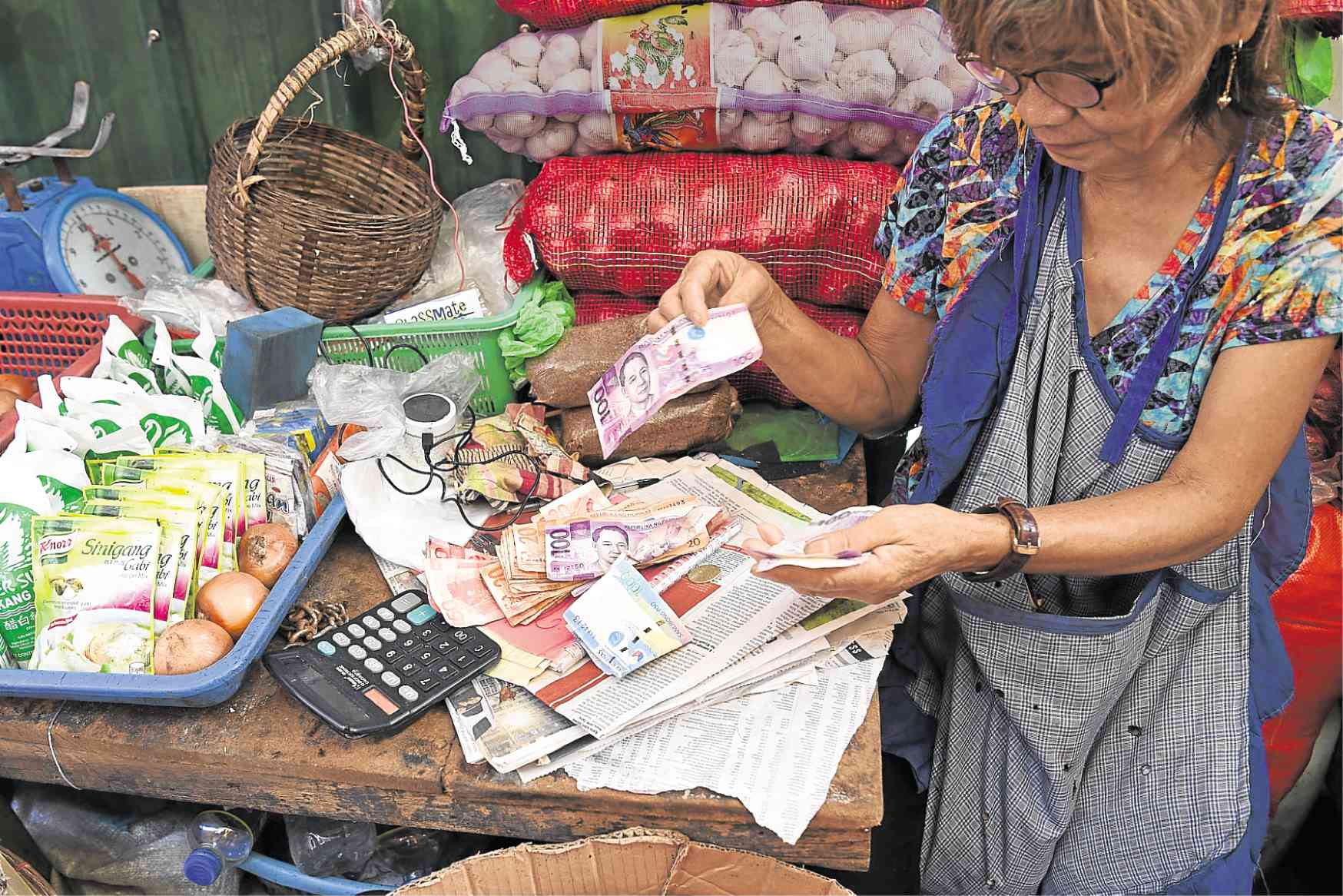 MAKING EVERY PESO COUNT A market vendor counts her earnings on Friday as Filipino consumers struggling to cope with rising prices absorb more bad news: The country’s inflation rate has risen for a ninth straight month in September. —AFP

At Orense Market in Makati City Shiena Cawit, 31, was making sure she was getting her money’s worth, taking her time studying a fist-sized sayote for any sign of rot.

“We can’t afford to choose the wrong one,” said Cawit, who lives with four others in Barangay Dasmariñas where she works as a house keeper.

“Just this April we could get twice the vegetables on the same budget. Now it’s a process of ellimination,” Cawit said. “If we’re buying cabbage, no more brocolli. If we’re getting fish, no more meat.”

The inflation rate averaged 5 percent as of end-September, above the government’s full-year target range of 2-4 percent.

Inflation in Metro Manila eased to 6.3 percent from August’s 7 percent, but the rate in areas outside the National Capital Region rose to 6.8 percent from 6.2 percent a month ago.

Outside Metro Manila, prices went up in all regions and across almost all commodity groups, except for communication and education as the free tuition scheme in state universities and colleges took effect in August, PSA data showed.

The government’s economic team partly blamed Typhoon “Ompong” for high food prices. The typhoon disrupted supply and caused damage amounting to P26.8 billion to agriculture, including facilities and infrastructure, the economic managers explained in a statement.

The cigarette excise tax had risen to P35 per pack starting July under the Tax Reform for Acceleration and Inclusion (TRAIN) Act.

Last January, the unitary excise tax slapped on cigarettes rose to P32.50 per pack from P30 a pack last year.

Since Jan. 1, the TRAIN law, or Republic Act No. 10963, had jacked up or imposed new excise taxes on cigarettes, sugary drinks, oil products and vehicles, among other goods, to compensate for the restructured personal income tax regime that raised the tax exemption cap.

A consumer group slammed government officials for lying when they said that price controls would only lead companies to hoard their supplies.

However, without the controls the prices of food items and non-alcoholic beverages soared in September, said Laban Konsyumer Inc. (LKI) President Victorio Dimagiba.

Albay Rep. Joey Salceda said that in his region, Bicol, the price of rice rose by 15.9 percent.

The inflationary spike is likely to have created 202,800 more poor people, according to Salceda.

“What I can say is that it happened to me before but then within a few months we were able to bring it down to 1.5 percent, so it can be done,” Arroyo told reporters.

Lawmakers called on the administration to either suspend or completely remove the excise tax component in the TRAIN Law.

Surigao del Norte Rep. Robert Ace Barbers on Thursday filed House Bill No. 8369 that seeks to repeal that section of the law and reverting the excise taxes on fuel to the old National Internal Revenue Code rates of excise tax on fuel.

Opposition Rep. Edcel Lagman of Albay, on the other hand, urged the House leadership to expedite the consideration and approval of his proposed Joint Resolution No. 27 suspending the increases and scheduled increases in the excise taxes on fuel to tame the projected higher inflation rate in the fourth quarter of this year.

Lagman said imposing additional and higher excise taxes on imported oil products was a “patently flawed policy” for an oil importer like the Philippines.

Sen. Sherwin Gatchalian said there should be a careful study on whether to proceed with the second round of hikes for excise tax on fuels. —WITH REPORTS FROM ROY STEPHEN C. CANIVEL, MARLON RAMOS, JEROME ANING, JULIE M. AURELIO, DJ YAP, JOVIC YEE, KRIXIA SUBINGSUBING, MAR S. ARGUELLES AND AFP