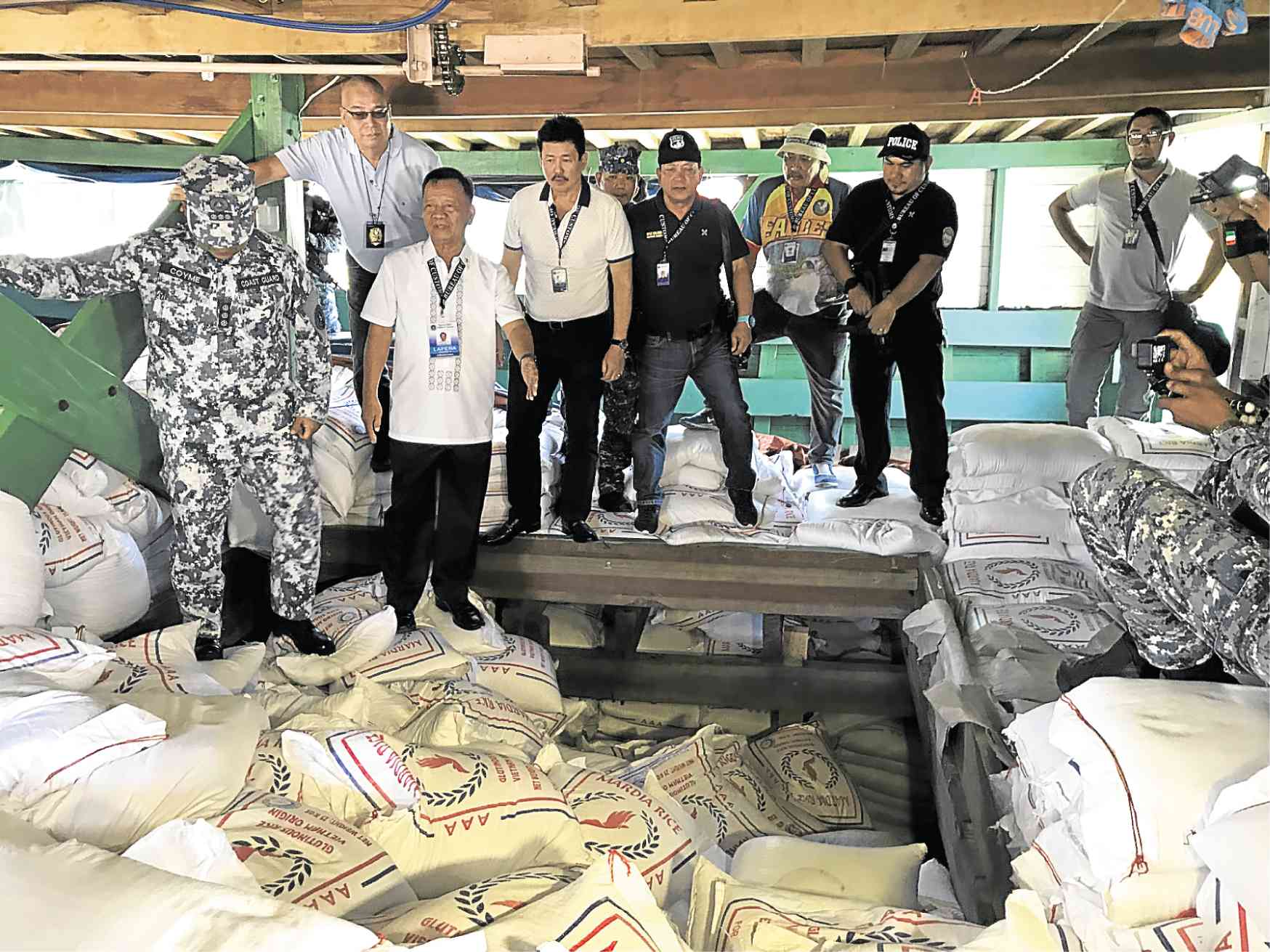 SMUGGLED RICE Customs Commissioner Isidro Lapeña inspects one of two boats loaded with smuggled rice from Malaysia, which were apprehended by the Philippine Coast Guard in Basilan province in late August. —JULIE ALIPALA

“Visibly upset” about the missing 23,015 sacks of rice smuggled from Malaysia that the government had earlier seized, President Duterte ordered “an immediate and thorough” investigation of the incident in Zamboanga City.

“The President was really angry because how do you lose 23,000 sacks?” presidential spokesperson Harry Roque said on Thursday at a news briefing.

He said it was Executive Secretary Salvador Medialdea who told him about the President’s instructions after Duterte learned about the missing rice.

Roque said Duterte instructed the National Food Authority (NFA) officer in charge and Customs Commissioner Isidro Lapeña to “immediately place on preventive suspension individuals who may be part of the scheme.”

The BOC chief also said he had sent a team of investigators to Zamboanga to look into the incident, according to Roque.

A crackdown on the smuggling of rice from Malaysia, coupled with the depletion of the rice reserve of the NFA, precipitated a severe rice shortage in Zamboanga City and Tawi-Tawi province.

The severe shortage sent prices of commercial rice soaring to P70 a kilogram in Zamboanga City and P80 a kilo in Tawi-Tawi, prompting their respective local governments to declare a state of calamity.

Prices of commercial rice in other parts of the country also surged, leading to calls for the sacking of NFA Administrator Jason Aquino, who later asked to be relieved of his post.

Malacañang has acknowledged that the high rice prices pulled down the approval and trust ratings of President Duterte last month.

Roque said the relief of Martinez and Salazar was “for the purpose of ensuring they cannot tamper with evidence and they cannot influence the investigation.”

The rice was found over the weekend in the Basulta Traders Corp. warehouse and two other warehouses.

The missing rice was said to be valued at more than P120 million.

Customs Commissioner Lapeña witnessed the official turnover of the rice seized by the PCG to the BOC.

The rice was supposed to be given to typhoon victims on Sept. 22.

On Sept. 28, the PCG and the BOC received reports that the rice was missing.

In Zamboanga City, Martinez said he was not suspended.

“I am just relieved of my duties and obligations as district collector of Zamboanga City so I cannot influence or affect the ongoing investigation regarding the missing 23,000 bags of rice,” he told the Inquirer.

Martinez said suspension would spell criminal liability. “I am optimistic that my name will be cleared.”

Lt. Cmdr. Noriel Ramos, district commander of the PCG in Zamboanga City, was also implicated in the loss of the rice by Salazar, the customs’ police commander.

“My name was dragged into this controversy because this Salazar claimed that I was the one who reportedly ordered the unloading,” Ramos said in an interview.

“That’s not true. We officially turned over the rice to the Customs and it was properly documented and I don’t follow any orders from Customs police,” he added.

Martinez said it was Salazar who ordered the release of the rice but Salazar claimed that the order was issued by Ramos of the PCG.

“I don’t follow orders or issue orders to other agencies. My jurisdiction is only the Philippine Coast Guard,” Ramos said.

“Besides, we only turn over the smuggled goods to Customs and the Customs is the one mandated to dispose this. We don’t have resources like warehouses and trucks to load those rice.”