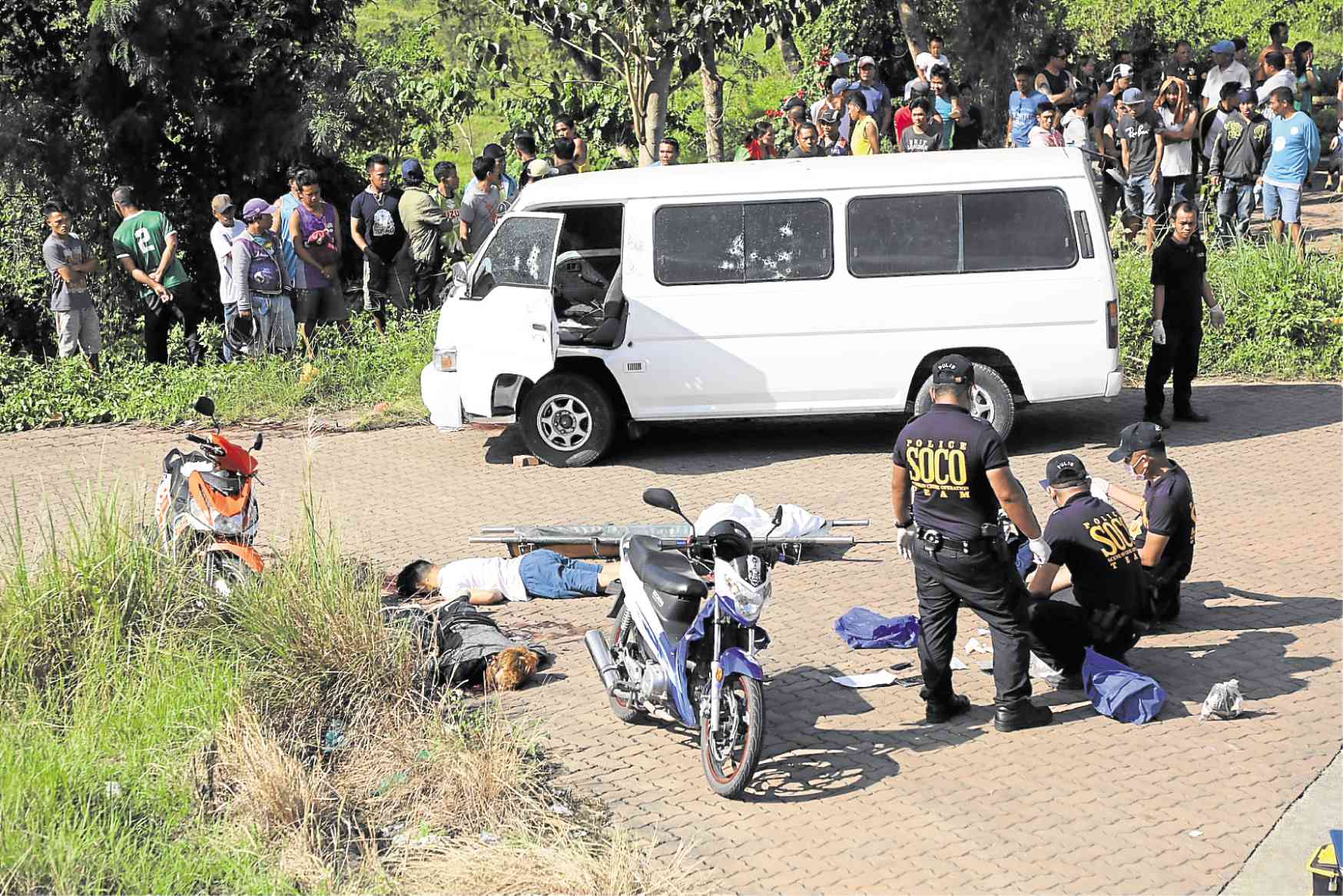 CEBU CITY—At least 14 people were dead by the time a “One Time, Big Time” antidrug operation ended here and in Talisay City on Thursday with two suspects surviving what they said was summary execution by police.

The survivors’ accounts angered the highest-ranking police official in Central Visayas who said one of the survivors, who pointed an accusing finger at police, could be hallucinating because of trauma.

Among the 14 dead were five persons whose bodies were found in a van and near two motorcycles on the TransCentral Highway in the mountain village of Malubog, Cebu City, around 3 a.m. on Thursday.

The five were among seven people taken by what the survivors said were policemen at a mall and condominium in the village of Guadalupe here at 5 p.m. on Wednesday.

It was not clear if their abduction and killing were part of the antidrug operation.

Police acknowledged only nine fatalities in the One Time, Big Time mission—three in Cebu City and six in Talisay City.

But the killing of the five coincided with nearly simultaneous police drug raids.

One of those seized in the two locations in Guadalupe—mall and condominium—was Antonio Belande, driver of a habal-habal, or motorcycle being used for public transport.

Belande said he and six others were picked up by policemen, some in uniforms.

He said he and another habal-habal driver were offered P200 to bring two persons—a woman and man—to the community of Banawa in Guadalupe.

While waiting for their passengers, he said six persons, who introduced themselves as policemen, came and took the keys of his and the other driver’s motorcycles, Belande said.

Shot one by one

He said he and the others were blindfolded and their hands tied with plastic restraints.

Around 3 a.m. on Thursday, Belande said they found themselves at a hilly part of Cebu City and were shot by their captors one after another. It was the village of Malubog.

Belande, in an interview with reporters, said he was able to free his hands from the plastic restraint and ran as quickly as he could, rolling down the hill and hiding in tall grasses.

He suffered a gunshot wound in the left part of the body.

“I really sensed that something bad would happen to us,” Belande told reporters.

“If I didn’t run away and roll down the hills, I know I would be killed, too,” he added.

“Just imagine I didn’t do anything wrong,” Belande said.

“I never engaged in any illegal activity and I was about to be killed,” he said, his voice cracking.

Another survivor, Sharmine Puran, was among the seven taken in the village of Guadalupe.

Crying and hysterical, Puran told reporters she was to deliver drugs to another woman when she was picked up along with Belande and the five others in Guadalupe.

She said the men who took them were members of the Special Weapons and Tactics team of the police.

According to Puran, she ran as fast as she could as their captors started to shoot.

Like Belande, Puran rolled down the hill where she was found by police and reporters.

She refused to be escorted by police to the hospital for treatment of her wounds.

Belande asked reporters, instead of police, to bring him to the hospital.

The identities of the five dead were still not known as of Thursday afternoon.

Belande and Puran were brought to Cebu City Medical Center and were being guarded by two policemen.

Chief Supt. Debold Sinas, director of the Central Visayas police, said police were not involved in the abduction and killing in Guadalupe and Malubog villages.

“Who said that the police were behind the killing?” he told reporters angrily.

“Can you stop insinuating? Somebody induced that idea,” he said.

“You know the survivor still has trauma and whatever he says is just a spur of the moment,” he said in a press conference on Thursday.

Sinas said he told the survivors that if they didn’t like the police, “then tell me.”

“We will go away,” he said, recalling what he said to Belande and Puran.

“I will pull out the two police escorts at the hospital,” said Sinas. “Good luck to them (survivors),” he said.

Suspicion of police involvement in what appeared to be summary killings was fueled by previous cases.

Two months ago, police were also linked to the foiled ambush of Tejero, Cebu City Councilman Jessielou Cadungog and the ambush of an agent of the Philippine Drug Enforcement Agency.

But Sinas repeatedly denied any hand in these cases.

He said the Central Visayas police was open to any investigation, saying they were not hiding anything.

“Whoever wants to investigate go ahead,” Sinas said.

“We are ready to defend ourselves,” he added.

“But please give us the benefit of the doubt,” Sinas said.

On Wednesday evening until Thursday dawn, the One Time, Big Time operations in different parts of Cebu led to the killing of nine suspects, according to police.

The dead were those who fought back, police said.