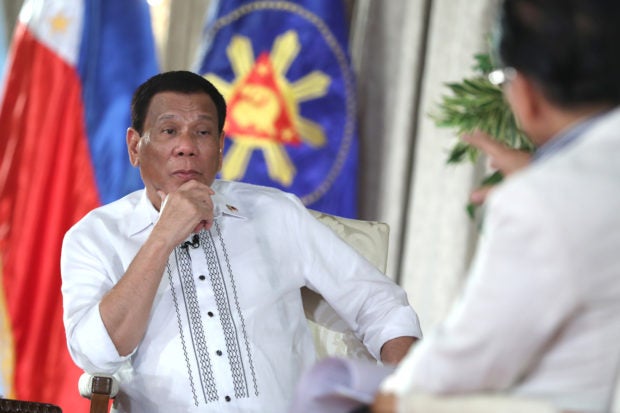 President Rodrigo Duterte admitted Thursday that he underwent a one-hour medical checkup at the Cardinal Santos Medical Center, contradicting the statements of his officials that he did not visit the said hospital amid rumors about his deteriorating health.

“Three weeks ago I had my endoscopy and colonoscopy. Then I was about to have ah… sana ngayon ‘yung Cabinet meeting yesterday… but ‘yung reading ng aking… somebody advised my doctor just also to repeat and get some samples there, both dito uli so I stayed there for one hour sa Cardinal Santos,” the President said in a speech before the military officers in Malacañang.

“So, hindi ko pa masabi kung meron ba talaga akong tama o wala. But I have this barrett and it has been bothering me since, ever since dahil nga sa inom rin,” he added.

He did not say the date he went to the hospital but he was supposed to have a Cabinet meeting in Malacañang on Wednesday.

“I don’t know where I’m now physically but I have to wait for that. But I will tell you if it’s cancer, it’s cancer. If it’s third stage, no more treatment. I will not prolong the agony in this office or anywhere,” Duterte said.

In a text message to INQUIRER.net, Executive Secretary Salvador Medialdea said Duterte underwent colonoscopy on Wednesday as an outpatient.

On Wednesday afternoon, Duterte skipped his scheduled event with the Philippine Amusement and Gaming Corp (Pagcor) in Malacañang Palace.

The “close-in” event set for 4 p.m. was instead attended by Medialdea. Close-in means the event was off-limits to media coverage.

Sought for explanation, Palace officials could not tell why the President failed to attend the only official schedule set for him on Wednesday.