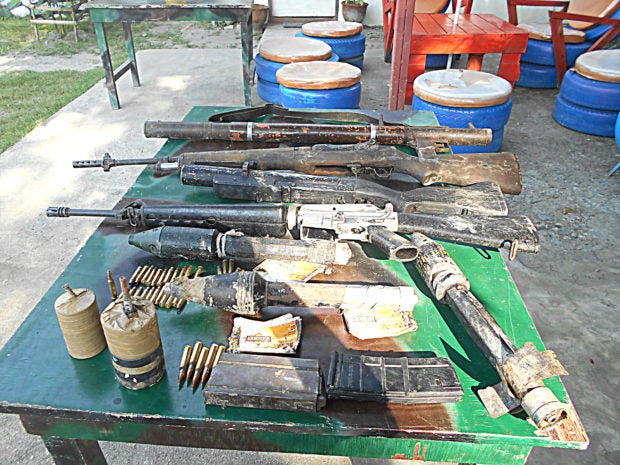 Guns, bombs the military recovered after a clash in a village of Shariff Saydona Mustapha town in Maguindanao. CONTRIBUTED PHOTO

Major Gen. Cirilito Sobejana, commander of the 6th Infantry Division, said the recovery of the war materials came after a brief firefight in Barangay Nabundas in Shariff Saydona Mustapha town in Maguindanao.

He said the troops successfully penetrated the bandits’ location about 4 a.m. but after a 20-minute skirmish, the bandits fled deep into the marshland.

Sobejana could not say if the BIFF suffered casualties. He said there was no casualty on the government side.

Soldiers found in the terrorists’ hideout M16, one M14, one M79, two improvised bombs, and assorted magazines and ammunition.

Sobejana lauded the civilians who tipped the Army off about the terrorists’ hideout.

A village official, who asked not to be named, said the armed men were demanding “zakat” (religious tax) now that they have started harvesting corn crops.

Shariff Saydona is a town within the so-called SPMS (Shariff Aguak, Pagatin (Datu Saudi), Mamasapano and Shariff Saydona) box, which the military said, has been the stronghold of BIFF armed men who pledge allegiance to the ISIS.

BIFF had been blamed for several bombings in Maguindanao, Sultan Kudarat, and North Cotabato.