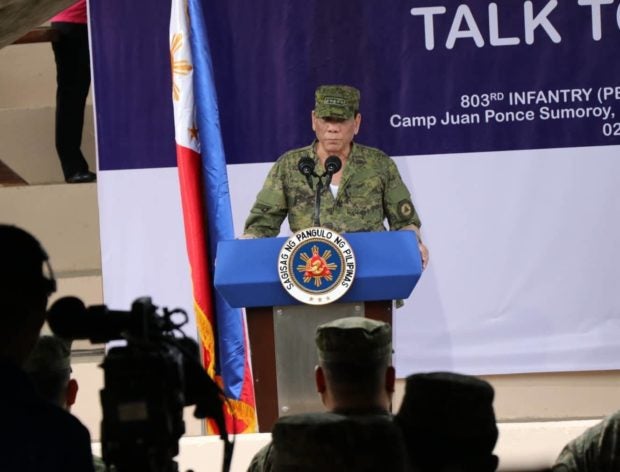 “We are not into crime prevention… it’s neutralization ang akin (my stand is neutralization), then we can solve the problem,” Duterte said in a speech addressing the 803rd Infantry Brigade at Camp Juan Ponce Sumuroy in Catarman, Northern Samar.

“There is no crime prevention because the crime is being perpetuated 24 hours a day. Hindi mo kailangang magtanong pa kung may warrant warrant d’yan basta may dala ka nang baril d’yan, sparrow ka, you can be neutralized (You don’t need to ask if there is a warrant. If you have a gun, you are a sparrow, then you can be neutralized),” he added.

The President also lamented that for more than five decades, the NPA had done nothing but kill and destroy lives in the Philippines.

He went on to say that he would not let his soldiers be imprisoned even for just one day for carrying out his orders to neutralize communists.

“Pilitin nila kayong i-preso, ah away ‘yan. Sabihin ko, ‘Iyan ang utos ko.’ Ang unang mapreso, ako. Hindi ‘yang sundalo ko (Let them try putting you behind bars, it’s going to be a fight. That’s my order. I will be jailed first rather than my soldiers),” he said.

“Kaya ‘yan ang utos ko (That’s my order). Neutralization. And that is the best way how to handle the problem now,” he added.

In the same speech, Duterte commended the 803rd Infantry Brigade for its efforts to combat security threats in the area, including the NPA.

The chief executive also reiterated his full support to the soldiers.

“Just work well. Be cunning. Be smart. And do not be afraid of problems. Ako ang bahala hanggang ako pa ang nakaupo dito sa — diyan sa Pasig— hindi ko kayo pababayaan (I’ll take care of this for as long as I am in power, I will not abandon you). You will never have any worry at all. Inyo trabaho lang (Just do your work),” he said.

Duterte also renewed his call for the NPA rebels to leave the armed struggle and surrender.

“I reiterate this administration’s call for communist terrorists to abandon their extremist activities and return to the fold of the law,” he said.

At the same time, he asked the soldiers to beef up their intelligence gathering and neutralize the communist group.

The President went on to rant against the CPP and described CPP founder Jose Sison as “hambugero (egotist)” whose group could not even overran a village.

During his visit, Duterte, who was wearing a military camouflage, also provided financial assistance to 15 former NPA members from the province who returned to the fold of the law.

He arrived in Catarman at 3:36 p.m. and was accompanied by Special Assistant to the President Bong Go and his military adviser, Undersecrtary Arthur Tabaquerro, who was once head of the 8th Infantry Division where the 803rd IB belongs. /ee