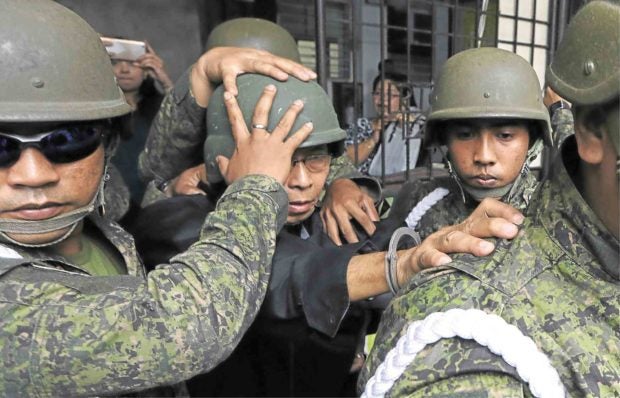 Retired Maj. Gen. Jovito Palparan Jr. is still enjoying the relative comfort of the Army’s custodial center two weeks after he was sentenced to serve life imprisonment in the national penitentiary for the kidnapping of two missing University of the Philippines students 12 years ago. (Photo by NIÑO JESUS ORBETA / Philippine Daily Inquirer)

In its order, the court denied Palparan’s motion to hold the implementation of the mittimus or commitment citing SC-OCA Circular No. 163-2013, which directs all trial court judges to cause the immediate transfer of convicted persons to the New Bilibid Prisons (NBP), regardless of the pendency of a motion for reconsideration or an appeal.

Palparan is currently at the Philippine Army Custodial Center in Fort Bonifacio, Taguig City even after he was convicted to suffer up to 40 years in prison for the 2006 kidnapping and illegal detention of University of the Philippines students Karen Empeño and Sherlyn Cadapan.

The National Union of Peoples’ Lawyers (NUPL), which acted as private prosecutors in the case, denounced the military’s non-compliance with the court order.

The military last week admitted that Palparan remains in their custody because another court has a commitment order allowing the general to stay at a military detention facility.

Justice Secretary Menardo Guevarra on Tuesday said the target schedule for Palparan’s transfer to NBP will be this Thursday morning.

“I have personally discussed the matter with AFP Chief [Carlito] Galvez who has assured me that the AFP custodial center will immediately comply without prejudice to the resolution of any further judicial review,” Guevarra told reporters.  /kga