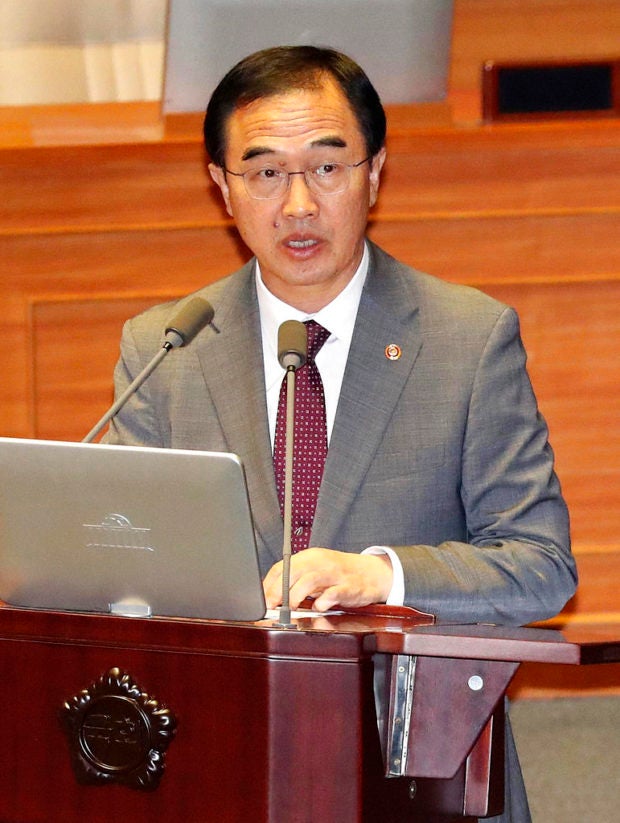 SEOUL, South Korea — A top South Korean official told lawmakers that North Korea is estimated to have up to 60 nuclear weapons, in Seoul’s first public comment about the size of the North’s secrecy-clouded weapons arsenal.

Unification Minister Cho Myoung-gyon told parliament Monday the estimates on the size of North Korea’s nuclear arsenal range from 20 bombs to as many as 60. He was responding to a question by a lawmaker, saying the information came from the intelligence authorities. The National Intelligence Service, South
Korea’s main spy agency, couldn’t immediately comment.

Cho may have unintentionally revealed the information. His ministry said Tuesday Cho’s comments didn’t mean that South Korea would accept North Korea as a nuclear state, suggesting Seoul’s diplomatic efforts to rid the North of its nuclear program would continue.

The South Korean assessment on the North’s arsenal is not much different from various outside civilian estimates largely based on the amount of nuclear materials that North is believed to have produced.

According to South Korean government reports, North is believed to have produced 50 kilograms (110 pounds) of weaponized plutonium, enough for at least eight bombs. Stanford University scholars, including nuclear physicist Siegfried Hecker who visited North Korea’s centrifuge facility at Nyongbyon in 2010, wrote earlier this year that North Korea is estimated to have a highly enriched uranium inventory of 250 to 500 kilograms (550 to 1,100 pounds), sufficient for 25 to 30 nuclear devices.

The North entered talks with the United States and South Korea earlier this year, saying it’s willing to negotiate away its advancing nuclear arsenal. Nuclear diplomacy later stalled due to suspicions over how sincere North Korea is about its disarmament pledge, but U.S. Secretary of State Mike Pompeo is to visit Pyongyang this month to set up a second summit between President Donald Trump and North Korean leader Kim Jong Un. /ee