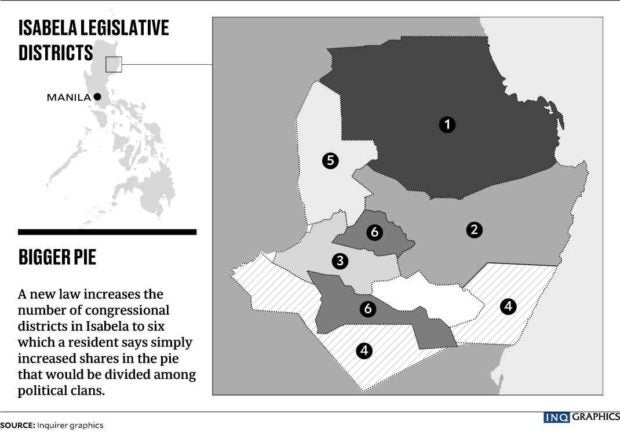 Political leaders did not offer any insight as to whether the two additional districts, created by Republic Act No. 11080, would affect local alliances in Isabela.

Rep. Napoleon Dy said two new districts would mean “better development to village folk as more representatives would bring in projects aside from making laws vital to the country.”

Dy and fellow Isabela lawmakers Ana Cristina Go and Rodolfo Albano III are on their third terms and barred from seeking reelection.

Only Rep. Lourdes Aggabao is running for a second term in May 2019.

All four legislators sponsored the measure to create the two new districts.

Forming six districts benefits Isabela, Vice Gov. Antonio Albano said, adding that “six congressmen will be able to take care of their constituents as their congressional districts are now smaller in terms of municipalities and cities that they will represent.”

“Only good will come out in having two more additional districts,” he said.

Some residents said Cauayan and San Isidro were not contiguous to San Guillermo and Echague. “These areas are too far apart to be a single district,” Lilia Almazan said .

Others expressed reservations about the intent of the law. “Some politicians here are likely jubilant for having more shares in the pie,” said Roberto Agudong, a farmer.

Betting Cabaccan, a market vendor, said each Isabela congressman now served smaller districts “but there is no assurance that people will get more social services.”

It had an internal revenue allotment of P221.2 million in 2016, P249 million in 2017 and P267 million this year, according to the Department of Budget and Management.

It’s been common practice for politicians to avoid fighting each other over legislative districts by pushing for laws to create new districts.