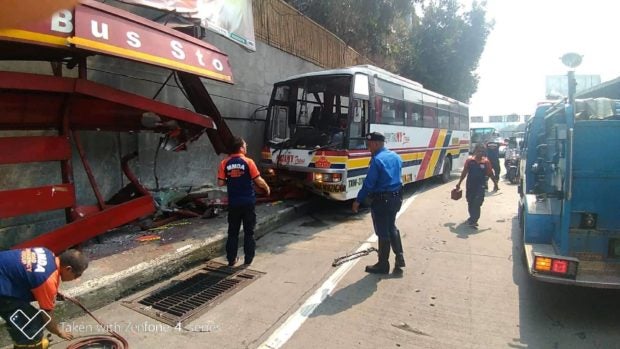 One person was killed while 12 others were injured after a city bus crashed on to a loading bay along the northbound section of EDSA on Monday afternoon.

A report from the Metropolitan Manila Development Authority (MMDA) showed that a Fairview-bound Mayamy Bus (TXW-376) was negotiating EDSA from Pasay when it hit the loading bay or passengers’ waiting shed near Buendia station of the Metro Rail Transit line 3 around 1:32 p.m.

The fatality was identified as bus conductor Jazel Mandy. Authorities said his head was pinned between the bus and roof of the waiting shed, and that he was declared dead on arrival at the hospital.

The report, a copy of which was obtained by INQUIRER.net, also said injured passengers were rushed to St. Luke’s Medical Center in Bonifacio Global City for medical treatment.

Bus driver Isagani Aquio, 40, and a one-month old baby were among those injured, according to MMDA.