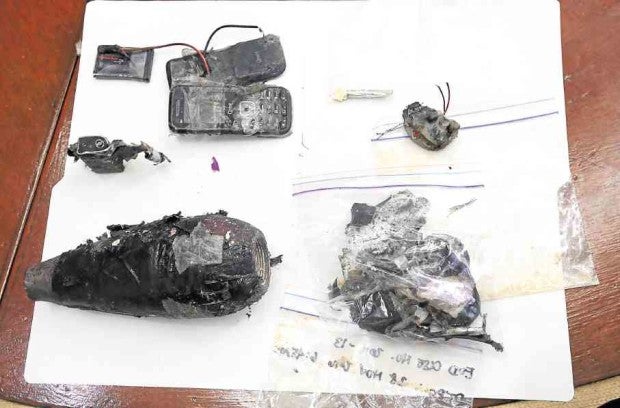 This file photo shows what remains of an improvised explosive device or IED after it was defused by explosive ordnance experts. The bomb components include an 81-mm mortar round (lower left). INQUIRER FILE

CAMP SIONGCO, Maguindanao – Soldiers, acting on a tip from a concerned citizen, foiled an attempt to bomb Cotabato City on Monday morning after they intercepted a powerful improvised explosive device (IED) loaded on a passenger jeepney.

Major Arvin John Encinas, spokesperson of the 6th Infantry Division, said soldiers flagged down a “Lawin” passenger jeepney as it passed by a detachment of the 90th Infantry Battalion in Barangay Capiton, Datu Odin Sinsuat, Maguindanao at 7 a.m.

The detachment was about a kilometer away from the 6th ID headquarters in Barangay Awang in the same town.

“It was placed under the seat of the Lawin jeep and was found by soldiers,” Encinas told the Inquirer about the IED fashioned from 81 and 60 mm mortar rounds with a mobile phone as the triggering mechanism.

Citing intelligence reports, Encinas said the IED was manufactured in the marshy villages of Midsayap in North Cotabato, loaded onto a motorized boat and transported to Kabuntalan town before it was put on the jeepney.

When asked whether the Islamic State-inspired Bangsamoro Islamic Freedom Fighters (BIFF) was involved, Encinas said the recovered IED, now in the hands of Army bomb experts, had the trademark of the BIFF.

“It was similar to other IEDs set off and recovered in Maguindanao,” Encinas said.

It took about an hour for bomb experts to safely defuse the bomb, causing a monstrous traffic jam along portions of Isulan-Cotabato highway.

On July 20 this year, a powerful IED was also found inside a passenger van plying the Isulan-Cotabato City route.  The van driver said it was loaded by a man in Datu Saudi Ampatuan town to be fetched by someone at the terminal in Cotabato City.

Police and Army personnel intercepted the IED at a police checkpoint in Barangay Broce, Datu Odin Sinsuat, Maguindanao, a kilometer away from the 6th ID headquarters. /cbb