But the ACTS-OFW lawmaker accused of harassing screener who asked him to remove his shoes claims footage was edited
By: Matthew Reysio-Cruz - Reporter / @inquirerdotnet
Philippine Daily Inquirer / 07:00 AM October 01, 2018 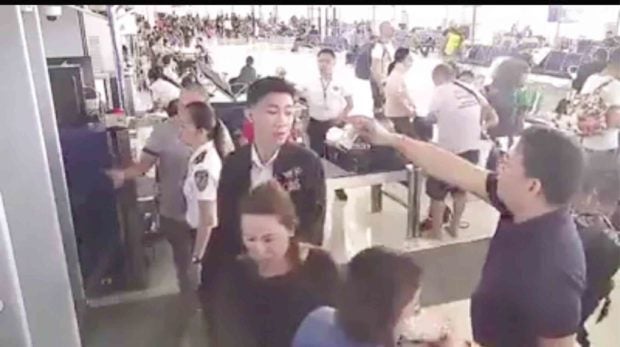 Bertiz drew widespread flak for a video that showed him allegedly flouting security protocol at Ninoy Aquino International Airport (Naia), just days after he publicly apologized for another viral video in which he “jokingly” told new engineers that those who did not know Special Assistant to the President Christopher “Bong” Go would not get their professional license.

The one-minute video taken on Saturday morning at Naia Terminal 2 appeared to show Bertiz confronting a screening officer who had asked him to remove his shoes at a security checkpoint.

In an interview, the solon decried the footage as a “twisted story” that had been edited with the “intent to cover up a fellow Naia employee’s wrongdoing.”

Although the widely shared video had no audio, it was superimposed with text that supposedly explained what was happening. It began with Ilocos Norte Gov. Imee Marcos passing through a metal detector holding her shoes before putting them back on.

After passing through another detector, Bertiz took his backpack then turned toward the screening officer, who, according to the text, had asked him to remove his shoes.

The video showed Bertiz flashing an ID in front of the employee’s face before grabbing the officer’s own ID and then rebuffing his attempts to retrieve it.

The video’s caption described the congressman as an “ignorant politician” and accused him of abusing his authority.

For his part, Bertiz said that two Chinese-looking civilians escorted by Naia employees had passed through the detector before him with their shoes on.

He explained that this “selective” application of the security rule irked him especially when the security worker advised him to go through the detector again, this time without his shoes.

“I told him, ‘You must be new. Next time, apply the security protocol to everyone, not selectively,’” Bertiz said.

According to him, the Naia employee then replied: “I’ve been working here for three years, who are you?”

It was at this point that Bertiz said he showed the man a green-coded security pass that allowed him access to “almost all areas of Naia.” He admitted taking the officer’s ID but insisted that he only photographed it then returned it “without any argument.”

It was unclear who first posted the video, which had been downloaded and shared by numerous Facebook users by Sunday. The accompanying caption, however, claimed it came from the Airport Police Department, which the Manila International Airport Authority (MIAA) said it was attempting to confirm.

Bertiz initially framed the issue as a security breach, saying it was clear the video was not taken with a cell phone but rather “shared from a desktop at the Office for Transportation Security (OTS).”

“Whenever we request closed-circuit television camera footage of theft or domestic workers being trafficked, we need court clearance,” said Bertiz, who added that the retrieval of videos could take months.

He showed the Inquirer a text message from MIAA General Manager Ed Monreal that said his report had been investigated and that the “staff [was] extending his apologies.”

But in an official statement released later on Sunday, Bertiz suddenly appeared contrite, saying: “I offer no excuse. I am sincerely sorry for my actions.”

A brief statement jointly issued by the Department of Transportation, MIAA and OTS on Sunday afternoon did not confirm specific details of the incident. It only made general references to a “thorough investigation” that was under way and said “all reports, complaints and actual video footage” were being compiled and evaluated.

“Authorities are now studying if any law or protocol has been violated and assure all individuals concerned that any decision shall strictly be in accordance [with] existing rules, regulations and procedures,” it said.

Bertiz first courted controversy when he appeared at an oath-taking event attended by agricultural and biosystems engineers on behalf of Go, the original keynote speaker, last week.

After a tepid response from the audience when Bertiz asked if they knew Go, the congressman quipped that “those who didn’t know [Go] would not get their professional license later.”

Bertiz later apologized for the “inappropriate” joke, saying he “didn’t mean to anger, belittle or offend in any way.”