Project shelved during FVR time because of opposition but Speaker says it’s time to study it now
Philippine Daily Inquirer / 05:17 AM October 01, 2018 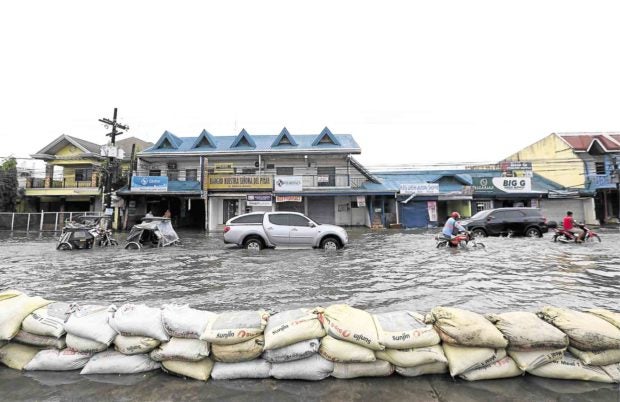 FAMILIAR SIGHT Vehicles move slowly through floodwaters in San Simon town, Pampanga, one of many areas in the province suffering from perennial flooding. —LYN RILLON

SAN ANTONIO, Nueva Ecija — A flood control project, which was developed during the administration of former President Fidel V. Ramos but was shelved due to strong opposition from local officials and residents, is being revived to help manage the Pampanga River basin, which has been blamed for the frequent floods in Central Luzon, Speaker Gloria Macapagal-Arroyo said here on Friday.

Arroyo led discussions on the P54-billion comprehensive flood control project, which would cover the Pampanga River from Arayat town in Pampanga province to Calumpit town in Bulacan province, during a meeting of Central Luzon officials, engineers and flood control experts.

On Oct. 11, the Department of Public Works and Highways (DPWH) will bid out feasibility studies for the project, which has been opposed because of the social impact of its construction work.

“Floods during [Ramos’ time] were bad,” Arroyo said after the meeting, which also addressed crop and infrastructure damage brought by flooding due to monsoon rains in August and Typhoon “Ompong” (international name: Mangkhut) in the middle of September.

“Now these have become much worse and we have to push through with the project,” Arroyo added.

“These days, floods course through so many areas in Nueva Ecija before the water flows down to Pampanga and Bulacan, [the worst hit Central Luzon provinces],” she said.

Worse, floodwaters stagnated in some villages for as long as a month after each typhoon and had become economic and health hazards, she said.

She said the project was the next phase of the Pampanga Delta Development Project that was supposed to have been implemented in 2003 but was shelved due to opposition from local officials and residents.

A third project planned for 2019 will manage a “flood path” from the towns of Gabaldon and Rizal in Nueva Ecija to Arayat in Pampanga.

According to DPWH officials, rain pushes water levels up in the Lingayen Gulf and the Agno River.

The waterways directly affect Moncada and Paniqui towns in Tarlac, Angeles and San Fernando cities and Lubao town in Pampanga, Calumpit town and City of Malolos in Bulacan, and Cabanatuan City in Nueva Ecija.

Arroyo said short-term solutions included the dredging of the Calisi, San Gabriel and Balara rivers, which would cost the government P450 million, and the installation of a P230-million floodgate at the mouth of the Bebe-Anac Channel in Pampanga.

She said among the long-term flood mitigation projects were the construction of dikes worth P15.3 billion on both banks of the Pampanga River, a west Pampanga flood control project costing P13.5 billion and a 40-kilometer dike with tidal gates costing P9.3 billion. —Armand Galang