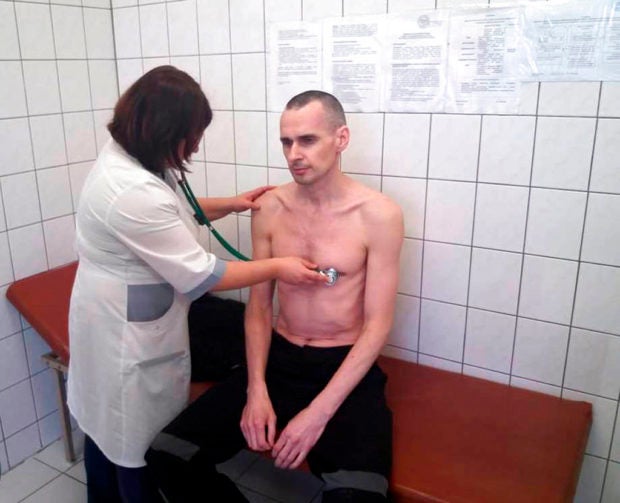 In this handout photo taken on Friday, Sept. 28, 2018 and released by Russian Federal Penitentiary Service, a doctor examines imprisoned Ukrainian filmmaker Oleg Sentsov in the hospital in Labytnangi, Yamalo-Nenets region, Russia. Sentsov, an opponent of Russia’s 2014 annexation of Crimea, was sentenced to 20 years in prison in 2015 for conspiracy to conduct terror attacks, charges that he denies. Image: Russian Federal Penitentiary Service via AP

MOSCOW (AP) — Ukraine’s Foreign Ministry is demanding that Russia allow consular access to an imprisoned Ukrainian filmmaker who has been on a hunger strike since mid-May.

Foreign Ministry spokeswoman Mariana Betsa made the demand Saturday on Twitter. Russia’s penitentiary service said Friday that an unspecified “correction” in Oleg Sentsov’s treatment had been ordered; it published a photo of him being examined with a stethoscope.

The filmmaker is an opponent of Russia’s 2014 annexation of Crimea. He was sentenced to 20 years in prison in 2015 for conspiracy to conduct terror attacks.

Sentsov denies guilt and has refused to seek a pardon from President Vladimir Putin.

His lawyer said this month that Sentsov’s health was irreversibly damaged. Prison officials say he is receiving a nutritional formula. NVG