Trump urges supporters to vote in wake of Kavanaugh hearing 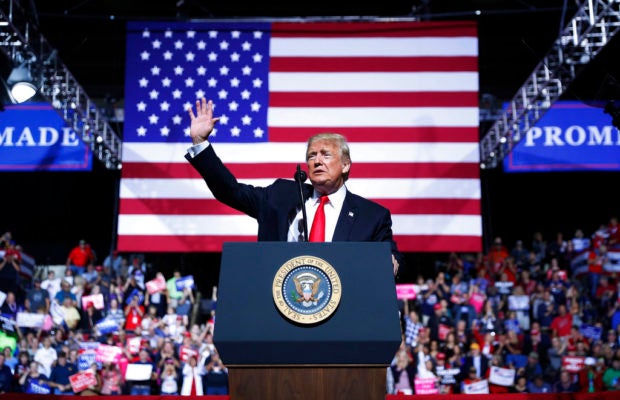 WHEELING, W.Va. — President Donald Trump on Saturday turned his embattled Supreme Court nominee Brett Kavanaugh into a rallying cry for Republicans to vote in November, saying they can help reject the “ruthless and outrageous tactics” he says Democrats used against the judge.

“We see this horrible, horrible, radical group of Democrats. You see what’s happening right now,” Trump said at a rally with thousands of supporters in West Virginia. Trump won the state in 2016 by 42 percentage points and remains popular there.

“And they’re determined to take back power by any means necessary. You see the meanness, the nastiness. They don’t care who they hurt, who they have to run over to get power,” he said.

“We’re not going to give it to them,” Trump said.

Kavanaugh, the federal appeals judge Trump nominated to the nation’s highest court, appeared headed for confirmation until California professor Christine Blasey Ford accused him of sexually assaulting her when they were teenagers in Maryland in the 1980s. Kavanaugh denied her accusations and those of two other women since have accused him of sexual misconduct.

Ford initially made her claims in a confidential letter to Sen. Dianne Feinstein of California, the top Democrat on the Senate Judiciary Committee. But the letter was leaked after Kavanaugh’s initial confirmation hearing before the committee and Ford then told her explosive story to The Washington Post.

Feinstein denied being the source, but Trump blamed her for the leak and mocked her at the rally, telling supporters to remember her answer when she was asked about the leak.

“The entire nation has witnessed the shameless conduct of the Democrat Party,” Trump said.

Feinstein responded to Trump on Twitter, saying she acted “consistent” with Ford’s wishes for privacy from the moment she received the professor’s letter.

“We kept her letter confidential and did not leak the contents or its existence to anyone,” she said.

Trump took a humorous jab at another Judiciary Committee Democrat, Sen. Cory Booker of New Jersey, the former Newark mayor considered a possible challenger in 2020. The president told the crowd that Booker ran the state’s second-largest city “into the ground” and asked, “Now he wants to be president?”

During Kavanaugh’s initial confirmation hearing, Booker declared he was having a “Spartacus” moment in breaking committee rules and releasing documents about Kavanaugh, though the papers had already been cleared for release. He was referencing the 1960 movie starring Kirk Douglas about the leader of a slave revolt in antiquity.

“What was the moment he said he had?” Trump asked the crowd, which yelled back, “Spartacus!” Trump said: “I don’t think so. I think we take Kirk Douglas in his prime.”

Trump issued a fresh defense of Kavanaugh, calling him “one of the most accomplished legal minds of our time” and saying he had suffered “the meanness, the anger” of Democrats.

The president urged his supporters to go to the polls on Nov. 6, when control of Congress is at stake, and vote Republican and “reject the ruthless and outrageous tactics of the Democrat Party.”

Trump appeared in Wheeling a day after he reversed course and ordered a new FBI investigation of Kavanaugh. Democrats and some Republicans had been asking for the new investigation, which will delay by at least a week a Senate vote on his confirmation.

In a dramatic appearance Thursday before the Judiciary Committee, Ford publicly accused Kavanaugh of groping her and trying to remove her clothing after he pinned her to a bed at a house party when she was 15 and he was 17. Following her, Kavanaugh denied the allegations and angrily defended himself.

The panel followed up Friday by voting 11-10, along strict party lines, to recommend that the full Senate confirm Kavanaugh for the Supreme Court. But one committee member, Sen. Jeff Flake, R-Ariz., balked at voting for confirmation without the investigation. Republican leaders want Kavanaugh seated on the court before the Nov. 6 election and could do little but agree to Flake’s demand.

Flake asked for the investigation to be limited in scope and last no more than a week.

Trump agreed to an investigation after he had vigorously resisted asking the FBI — an agency he has repeatedly criticized — to look into the sexual assault and misconduct allegations. In defending Kavanaugh, Trump and other supporters noted that the allegations had never surfaced in six previous background checks during Kavanaugh’s long career in the executive and judicial branches of the U.S. government.

Trump sounded familiar themes during the hour-plus rally, including talking about the economy’s performance, his 2016 opponent Hillary Clinton, the escalating trade war with China and his relationship with North Korean leader Kim Jong Un.

Besides the Democrats, Trump leveled some of his harshest criticism at the news media, criticizing its coverage of his June summit with Kim and pointing out reporters in the WesBanco Arena. The audience broke into chants of “CNN sucks” when he again referred to journalists as the “enemy of the people.”

“When I say and come out with very, very strong statements about the media, I’m talking about the fake news media. They are truly an enemy of the people … This November you have a chance to reject these disgraceful political hacks.”

Trump’s visit to West Virginia was intended to help rally support for GOP candidates in the November elections, including Senate nominee Patrick Morrisey. The Democratic incumbent, Joe Manchin, faces a tough road to re-election in a state where Trump is popular.

Manchin supports the new FBI probe of Kavanaugh but has yet to announce his position on the nominee. He voted for Neil Gorsuch, Trump’s first nominee to the Supreme Court, and Trump would also like Manchin’s vote for Kavanaugh.

Saturday’s rally was one of many Trump planned to headline as part of a commitment to campaign aggressively — he has said seven days a week, if necessary — to help the Republican Party overcome significant Democratic opposition and anger and keep control of both houses of Congress.

Campaign rallies were scheduled next week in Tennessee, Mississippi and Kansas.