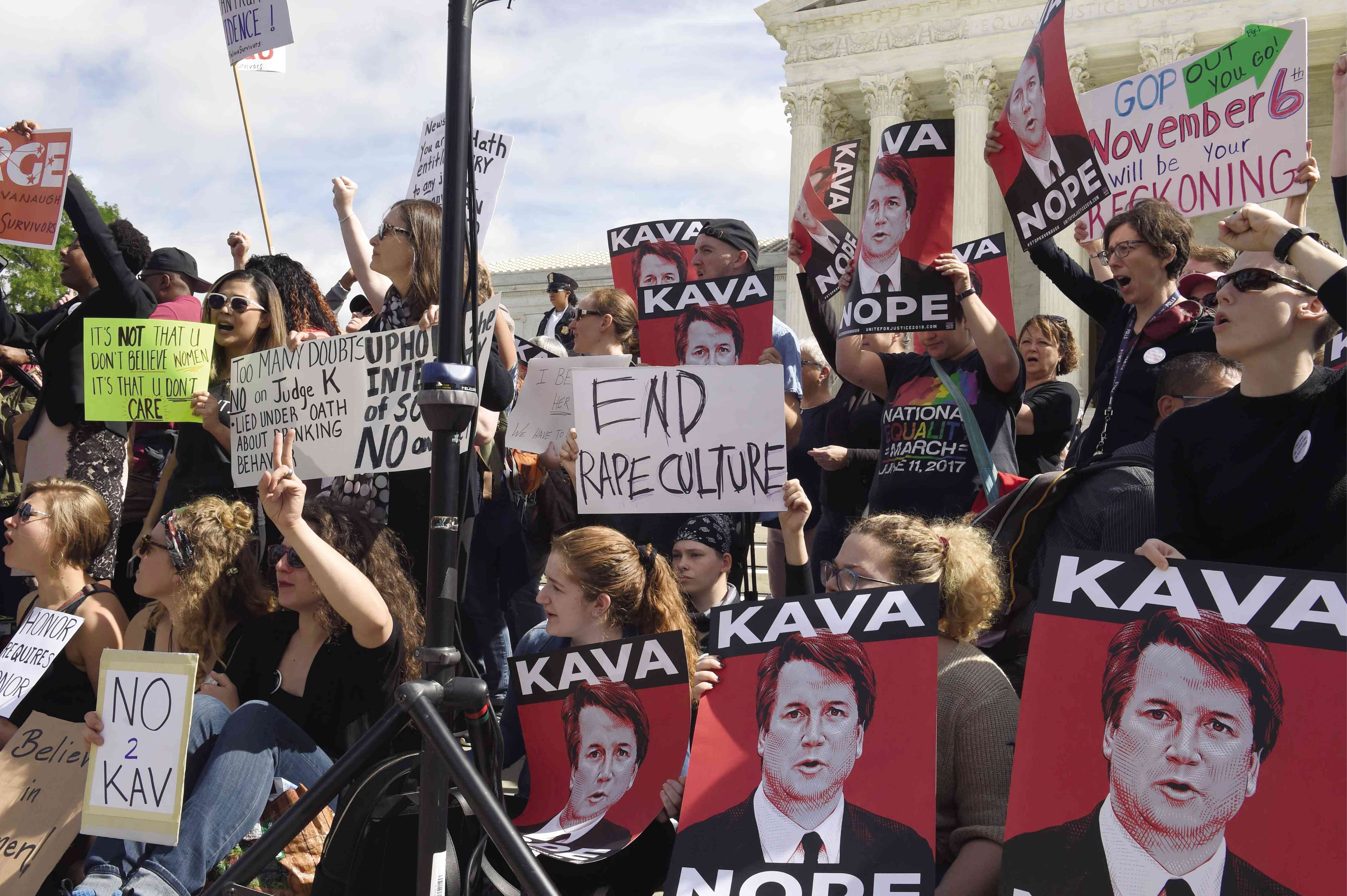 PROTEST VS TRUMP’S PICK Activists rage against US Supreme Court nominee Brett Kavanaugh in Washington on Friday, as heated partisan debate and raucous protests occur in the halls of the US Capitol. —AFP

WASHINGTON — US President Donald Trump on Friday ordered a new investigation by the Federal Bureau of Investigation (FBI) into sexual assault allegations against his Supreme Court pick, as the US Senate delayed a vote on Brett Kavanaugh’s nomination to make way for the probe.

After a dramatic daylong hearing at which a university professor accused Kavanaugh of pinning her down and assaulting her at a party in the 1980s, the Senate Judiciary Committee earlier on Friday approved his nomination in a preliminary vote along party lines.

But committee chair Chuck Grassley, a Republican, then bowed to intense pressure from inside and outside Congress, and announced he was asking Trump to order the new background review that “must be completed no later than one week from today.”

The Kavanaugh nomination has turned into a political firestorm ahead of November congressional elections in which Republicans will battle to keep control of Congress and is threatening to derail Trump’s push to get a conservative-minded majority on the top court ahead of the vote.

Trump, who repeatedly blasted Democratic opposition to Kavanaugh as a political “con-job,” agreed to the investigation.

“I’ve ordered the FBI to conduct a supplemental investigation to update Judge Kavanaugh’s file. As the Senate has requested, this update must be limited in scope and completed in less than one week,” the President said in a statement.

He later tweeted support for Kavanaugh, saying: “Just started, tonight, our 7th FBI investigation of Judge Brett Kavanaugh. He will someday be recognized as a truly great Justice of The United States Supreme Court!”

Trump’s order and the decision to put off a final vote came after a key Republican, Sen. Jeff Flake, threatened to break ranks with his party because of the clouds hanging over Kavanaugh.

At least three women have now accused the 53-year-old conservative judge of sexual misconduct while drunk, as a high school and later a university student.

Democrats have repeatedly demanded those charges be assessed by the FBI to determine if he is suitable for the lifetime high court appointment.

Flake’s 11th-hour move played out on national television amid heated partisan debate and raucous protests in the halls of the Capitol, where several women cornered the Arizona senator in an elevator demanding he oppose Kavanaugh.

“This country’s being ripped apart,” said Flake. “And we have to ensure that we do due diligence here.”

“There’s lingering doubt out there among a lot of people that we haven’t taken every measure that we should to make sure that these allegations are dealt with, and so that’s what this effort is about,” he said.

His move earned the endorsement of another Republican seen as wavering on the nomination, Lisa Murkowski.

With the Republicans holding a narrow 51-49 majority in the Senate, that placed pressure on Trump to order the FBI probe.

Republicans see Kavanaugh as pivotal to their gaining control of the nine-member Supreme Court bench.

Trump nominated him to replace Anthony Kennedy, who for years was a swing vote between four conservative and four liberal justices.

Many conservatives hope Kavanaugh’s appointment leads to a reversal of the court’s protection for women’s abortion rights and for “affirmative action” programs supporting minorities in schools and jobs.

Kavanaugh’s supporters and opponents squared off furiously in hearing rooms and protesters crowded the hallways of Congress chanting “November is coming!” a reference to the upcoming midterm elections.

“Don’t look away from me! Look at me and tell me that it doesn’t matter what happened to me, that you’ll let people like that go to the highest court in the land,” one weeping woman berated Flake, as he made his way to the committee room.

The panel vote split along strict party lines with the 11 Republican members backing Kavanaugh and all 10 Democrats opposing him.

The vote came a day after 51-year-old university professor Christine Blasey Ford described over four hours how she says Kavanaugh sexually assaulted her 36 years ago, and how it traumatized her for decades since.

Ford said she was “100-percent” certain that a drunken Kavanaugh, along with his friend Mark Judge, were the ones that attacked her at a high school party in suburban Maryland in 1982.

One of her lawyers, Debra Katz, on Friday said “no artificial limits as to time or scope should be imposed” on the new FBI investigation, US media reported.

After Ford’s testimony, Kavanaugh hit back furiously, categorically denying the assault took place and accusing Democrats of destroying his reputation for political reasons.

“This whole two-week effort has been a calculated and orchestrated political hit fueled with apparent pent-up anger about President Trump and the 2016 election,” he said, adding: “This is a circus.”