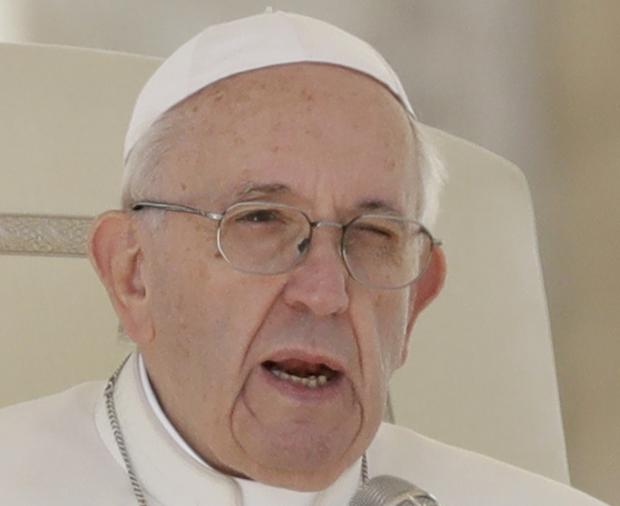 In this photo, taken on Wednesday, Sept. 26, 2018, Pope Francis delivers his message during his weekly general audience in St. Peter’s Square at the Vatican. The former Vatican ambassador who accused three popes and their advisers of covering up for a disgraced American ex-cardinal has denounced Pope Francis’ refusal to directly respond to his claims and challenged the Vatican to say what it knows about the scandal. (Photo by ANDREW MEDICHINI / AP)

VATICAN CITY — Pope Francis asked Saturday for daily prayers to protect the Catholic Church from what he says are “attacks by the devil,`” in his latest response to the clerical sex abuse and cover-up scandal roiling his papacy.

A Vatican statement appeared to be an indirect response to accusations that Francis himself, and a string of Vatican officials before him, were complicit in covering up the sexual misconduct of a now-disgraced American ex-cardinal.

The Vatican said Francis had asked for Catholics worldwide to unite and pray the Rosary each day during October “to protect the church from the devil, who is always looking to divide us from God and from one another.`”

At the same time, Francis asked for prayers so the church becomes ever more aware of its “guilt, errors and abuses committed in the present and the past and is committed to combat it without fail to prevent evil from prevailing.`”

Francis identified the devil as the “Great Accuser, who roams the earth looking for ways to accuse.`”

The Vatican wouldn’t say if Francis was referring to its former ambassador, Archbishop Carlo Maria Vigano, who has thrown the papacy into turmoil by accusing Francis of rehabilitating ex-Cardinal Theodore McCarrick from sanctions imposed by Pope Benedict XVI over reports he slept with seminarians.

Vigano accused more than two dozen current and former Vatican officials, as well as a host of U.S. bishops and papal advisers, of being part of the cover-up and called for Francis to resign over the scandal.

Francis has said he won’t respond to Vigano’s claims, but ever since Vigano’s 11-page accusation was published Aug. 27, Francis has referred repeatedly to the “Great Accuser`” who attacks the church and seeks to sow division within it.

In a Sept. 11 homily with visiting bishops in the pews, Francis said: “These days, it seems as if the Great Accuser has been unleashed and has it in for bishops. It’s true, we’re all sinners, all of us bishops.`”

Francis removed McCarrick as a cardinal in July after a U.S. church investigation determined an allegation he fondled a teenage altar boy in the 1970s was credible.

After news broke of the investigation, several former seminarians and priests came forward to report that they, too, had been abused or harassed by McCarrick as adults.

Vigano’s claims — coupled with new revelations of abuse and cover-up in the U.S. church — has led to a crisis in confidence in both the U.S. and the Vatican hierarchy, since McCarrick’s penchant for seminarians was apparently an open secret in some U.S. and Vatican church circles.

U.S. bishops have said the Vatican is preparing “necessary clarifications`” to Vigano’s claims, but they haven’t yet been released.

Vigano, for his part, has assumed that Francis’ repeated references to the devil and “Great Accuser`” are directed at him.

In a new missive issued Friday, Vigano blasted the Vatican’s official silence over his original claims and accused Francis of mounting a campaign of “subtle slander`” against him with his references to Satan in his morning homilies.

Vigano’s new document was dated Friday, Sept. 29, the feast of St. Michael, Archangel. St. Michael is considered the protector of the church, the leader of all angels who battled evil and drove it from the church.

Vigano has cast himself as the church’s protector who at great personal risk broke two decades of Vatican “omerta,`” or silence, to reveal the truth about McCarrick and his protectors for the good of the church.

Francis, in his Saturday prayer request, also cited St. Michael in urging prayers be directed to the saint “who protects us and helps us in the fight against evil.`”

He quoted a famous prayer to St. Michael that exhorts the saint to protect the faithful “against the wickedness and snares of the devil`” and asks for God to rebuke him and “cast into hell, Satan and all the evil spirits who prowl through the world seeking the ruin of souls.`” /atm