Woman who asked President to stop quarrying in Cebu missing 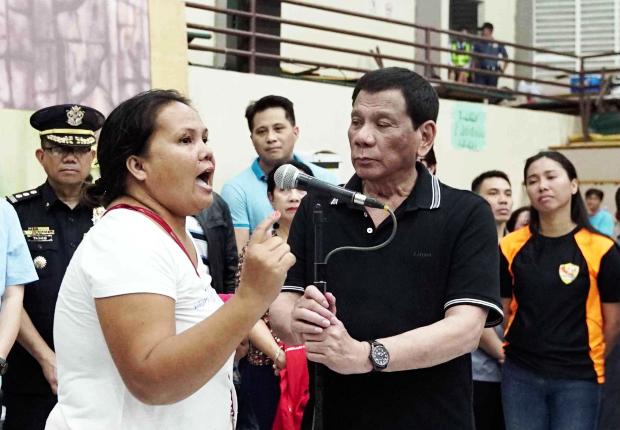 President Rodrigo Duterte holds the microphone stand as Shiela Eballe rants against quarrying during the President’s visit to Naga City to condole with relatives of those who died in a massive landslide there on Sept. 21, 2018. (Presidential Photographers Division)

NAGA CITY, Cebu — Where is Sheila?

Sheila Eballe, the outspoken woman who personally appealed to President Rodrigo Duterte to stop the quarry operations in Naga City in Cebu following the massive landslide last Sept. 21, has not returned either to the evacuation center for landslide victims or to her home for days now.

Neighbors and friends of Eballe, a 36-year-old resident of Sitio Greyrocks, Barangay Tinaan in Naga City, said they had no idea where woman was now.

Her stepfather, Emilio Librea, said Eballe had not returned to their home since she spoke to the President.

Librea said he last communicated with Eballe through the phone shortly after the latter appeared on television while talking to the President.

“We have not seen her since then. She could also not be reached for comment anymore,” he told the Inquirer. “We are worried because what she did in complaining to the President was very risky.”

A neighbor of Aballe, who requested anonymity, said they were afraid of what might have happened to the 36-year-old woman.

A report published by UCANews, an independent Catholic news organization in Asia, said Eballe sought the help of environmental group Pusyon Kinaiyahan and a religious organization after reportedly receiving threats for voicing her concerns to the President.

“She needs protection because of threats she is facing for speaking the truth,” Augustinian Recollect Brother Takoy Jakosalem said, according to the report.

In a speech at the Enan Chiong Activity Center last Sept. 21, the President asked the evacuees inside the place if they had any complaint.

Eballe, in a white blouse, bravely went onstage, faced the President, and told him that she and her neighbors at Barangay Tinaan would want to put a stop to the quarry operations that they blamed for the massive landslide.

“Stop the Apo Cement quarry. That’s what I’m asking. We don’t need food. What we need is for the quarry to stop because I believe if the people would just work, we’d still manage to eat,” she said.

With the President looking at her intently, Eballe continued and said she did not think heavy rains had triggered the landslide.

She said they’ve been through a lot of typhoons but no tragedy had struck until the quarry operations started.

Before she finished speaking, the President said: “I believe what you say. But look at your nails. I guess you were at the beauty parlor when the landslide happened.”

When Aballe left the stage, the President went on to say: “Maayong pagka-training ni sa kuan… [She’s well trained by the…].”

He then asked the crowd: “Are there any New People’s Army [communist rebels] here?”

Make sure that no one is supporting the NPA, he said, as he went on to rant against the Communist Party of the Philippines.

Many evacuees expressed disappointment at the President’s response.

“It wasn’t even close. He didn’t answer the question,” said Maritess Panilag, one of the evacuees.

She said Eballe was right in saying that the quarry operations of Apo Land and Quarry Corp. in Naga City caused the landslide.

“We’ve been living in the place for many years. We don’t feel safe with that quarry around,”

As of Saturday, 72 were dug out from the landslide site while 11 persons were still missing.

Environment Secretary Roy Cimatu has ordered the suspension of Mines and Geosciences Bureau (MGB) officials in Central Visayas and suspended quarry operations in the mountains around Naga City and several other provinces for 15 days to determine if they pose any danger. /atm