‘I will now go home’ – Trillanes 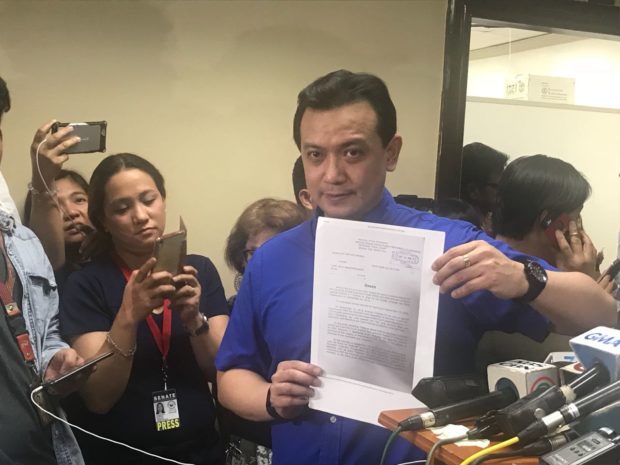 Senator Antonio Trillanes IV says he is now going home after Makati City Regional Trial Court Branch 148 resolved Friday, September 28, 2018, to defer the issuance of an arrest warrant against him, and instead scheduled a hearing on the opposition lawmaker’s coup d’état case on October 5. (INQUIRER.net/Noy Morcoso)

Senator Antonio Trillanes IV is set to go home this weekend after the Makati City Regional Trial Court (RTC) Branch 148 resolved to defer the issuance of an arrest warrant against him, and instead scheduled a hearing on the opposition lawmaker’s coup d’état case on October 5.

A smiling Trillanes emerged from his office for a press briefing on Friday, and said he is going home tomorrow, Saturday.

“Ngayon nais ko ring sabihin na (Now I also want to say that) with this order, I will now go home,” Trillanes, the fiercest critic of President Rodrigo Duterte, told reporters at the Senate, where he’s been holed up since September 4.

“At least on this day, our country won,” he also said. “This day was won by what is right. The rule of law won. Due process won.”

According to Trillanes, the Makati RTC’s order is a “light amid the darkness in the country.”

He said it proves that there are still people in the judiciary who uphold the rule of law.

“In this case, it was personified by Judge Soriano,” he said, referring to Makati City RTC Branch 148 Presiding Judge Andres Soriano.

Trillanes then thanked his colleagues in the Senate led by Senate President Vicente Sotto III; Senate employees, whom he said he might have inconvenienced for staying in his office the past three weeks; and his supporters for their support.

President Rodrigo Duterte issued on August 31 Presidential Proclamation No. 572, revoking the amnesty granted to Trillanes, a mutineer-turned-lawmaker, in 2011. The presidential directive claimed Trillanes’ amnesty is void ab initio since the senator allegedly failed to file an application for it and admit guilt over his participation in the 2003 Oakwood mutiny and 2007 Manila Peninsula siege.

Presidential Proclamation No. 572 was released to the public through an advertisement in a broadsheet published last September 4.  /kga