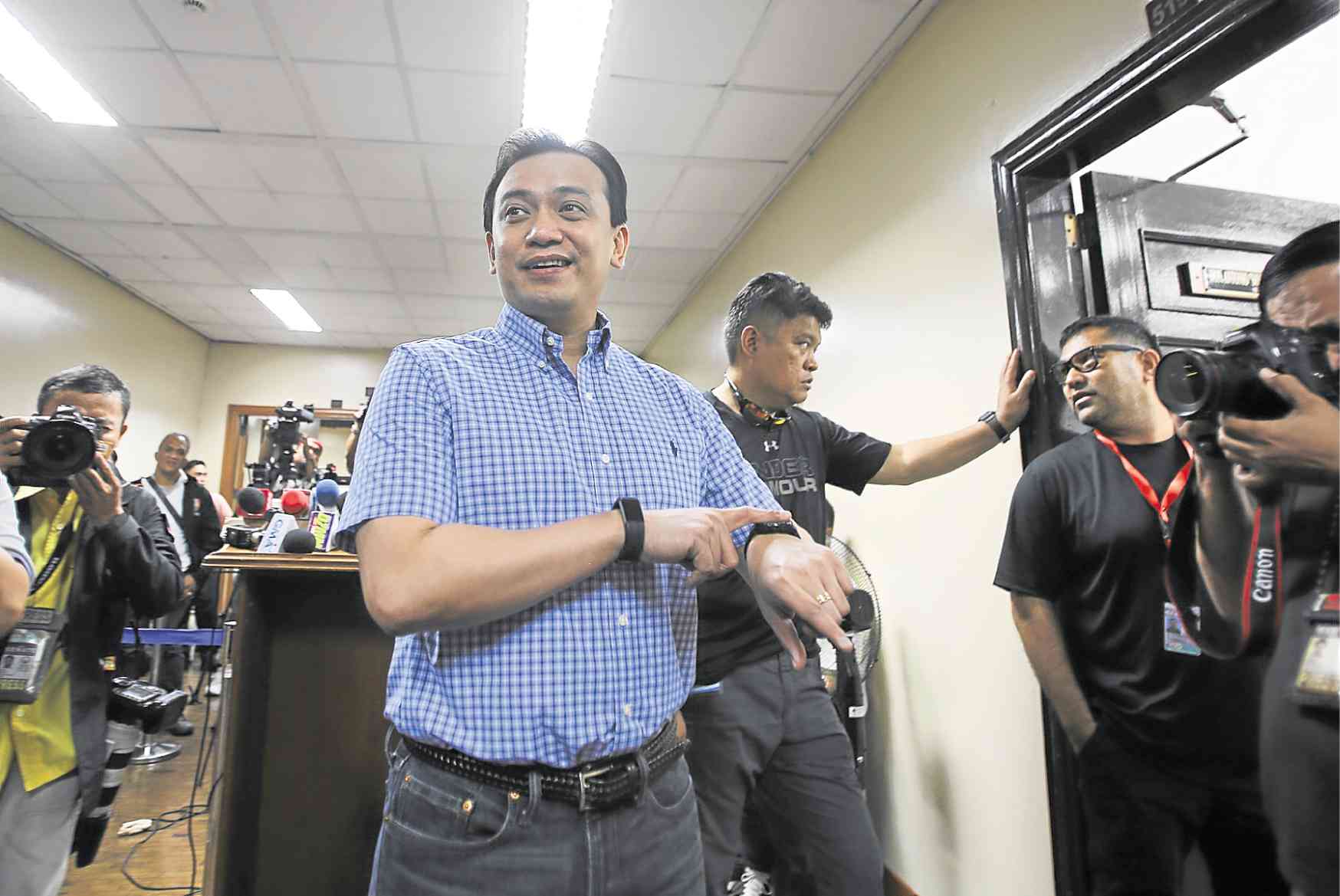 STILL FREE Sen. Antonio Trillanes IV tells Senate reporters on Thursday that they can relax as there is no new court order for his arrest. —JOAN BONDOC

The National Privacy Commission (NPC) should investigate the loss of Sen. Antonio Trillanes IV’s amnesty application form from the files of the Department of National Defense (DND), as it is considered a possible data breach, a former privacy official said on Thursday.

Jacob said the DND should have employed measures to protect personal information against “natural dangers such as accidental loss and human dangers such as unlawful access.”

“In Trillanes’ case, one could argue that the loss of his record by the DND amounts to a type of data breach,” Jacob said in an e-mail interview with the Inquirer.

Trillanes, a former military rebel, applied for amnesty on Jan. 5, 2011, together with other military mutineers who tried to overthrow the government in 2003, 2006 and 2007.

Their applications were approved three weeks later and the coup d’état and rebellion charges that had been brought against them were dismissed by the courts.

What happened to Trillanes’ application form is unknown but its loss became the basis for President Duterte’s Proclamation No. 572 revoking the amnesty granted to his fiercest critic in Congress and ordering the senator’s arrest and the revival of the charges against him on the grounds that he failed to file an application for amnesty and acknowledge guilt.

Trillanes showed proof that he applied for amnesty, including a picture of himself holding his application form and an affidavit from the military officer who handled his application attesting that he went through the process.

But the Makati Regional Trial Court (RTC) Branch 150, which the Department of Justice (DOJ) had asked to reopen the rebellion case against Trillanes, rejected the evidence as secondary, saying the application form itself or a copy of it was the acceptable proof that the former Navy junior officer applied for amnesty.

Jacob said the NPC should look into the case even if the commission had not yet received any complaint.

He cited instances in the past two years where the NPC went out of its way to investigate situations.

The privacy law, he said, gives the NPC freedom to initiate its own investigation even without receiving a complaint.

“The NPC, if it is to be consistent with its previous actions, or at least if it wanted to do, should look into it,” he said.

In a talk with reporters on Wednesday, Trillanes called on the military and the DND to “tell the truth” about the loss of his amnesty application form.

He said military and defense leaders knew that he applied for amnesty and had the documents to prove it.

But Solicitor General Jose Calida took the documents, he said, adding that Defense Secretary Delfin Lorenzana had called him to say that Calida had asked for the papers.

“Why did they allow Calida to acquire and lose these,” Trillanes said.

Calida took Trillanes’ statement as an accusation of theft and demanded an apology from the senator.

“Unless Mr. Trillanes expresses his sincere apology for calling me a thief, I shall be constrained to file a criminal case for libel plus damages against him,” Calida said.

“He’s in no position to demand anything. He knows the truth. The whole Philippines at this point knows the truth. Whatever he plans to do, I expect the worst out of him. He can do whatever he wants,” the senator told reporters on Thursday.

Trillanes is out on P200,000 bail, after Judge Noel Alameda of Makati RTC Branch 150 granted the motion of the DOJ to reopen the rebellion case against him and order his arrest.

The DOJ has also asked the Makati RTC Branch 148 to reopen the coup d’état case against Trillanes and order his arrest.

If the case is reopened, Trillanes will be imprisoned while under trial, as coup d’état is a nonbailable offense.

Trillanes’ lawyer Rey Robles said on Thursday that the senator’s camp was considering asking the Supreme Court to rule on his petition questioning the legality of Proclamation 572. — WITH REPORTS FROM LEILA B. SALAVERRIA AND VINCE F. NONATO