FEU student dies after ‘jumping off’ 14th floor of condo 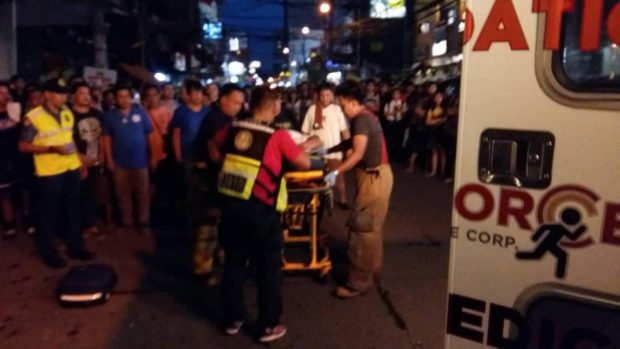 Emergency responders rush the 17-year-old student of the Far Eastern University to a hospital after, investigators claimed, he jumped off his condominium unit at the 14th floor of a building in Sampaloc, Manila Wednesday night. (Photo from the Manila Police District)

A 17-year-old student of the Far Eastern University (FEU) died after allegedly jumping off the 14th floor of his condominium unit in Sampaloc, Manila.

Reports from the Manila Police District on Thursday showed that the body of  the victim, a Grade 11 student, was found lying in front of the building at 5:51 p.m. on Wednesday.

Initial investigation disclosed that some of his friends visited him inside his unit before the incident. Investigators said the victim confided to his friends that he had problems, but he did not elaborate.

His friends left him alone in the unit at 5:46 p.m., according to police, and minutes later he was seen dying on the pavement in front of the building.

The victim was  immediately rushed to Mary Chiles Hospital but was declared dead on arrival. /jpv

The Department of Health (DOH) reminded the public, especially those who may have mental health issues, that they can contact the DOH’s 24/7 Hopeline to either help them unburden their emotional baggage or to seek professional help. Hopeline can be reached via tel. no. (02) 8044673, mobile no. 0917 558 4673 or toll-free 2919 for Globe and TM subscribers.