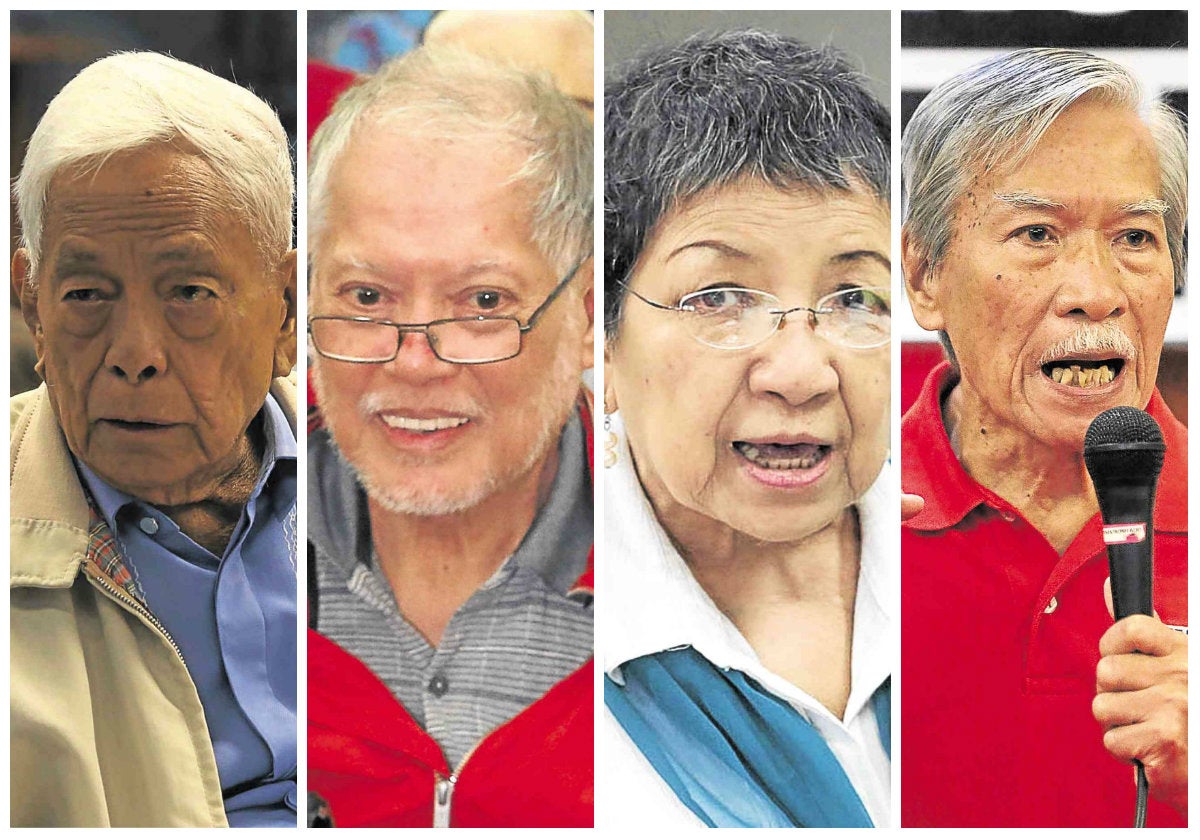 Four prominent political detainees of the martial law era reunited on Wednesday to give the lie to a claim by former Sen. Juan Ponce Enrile, who, in a widely condemned conversation with the son of dictator Ferdinand Marcos, denied that such prisoners even existed.

Rosales, holding a framed copy of her 1976 mugshot, challenged Enrile’s assertion that no one was arrested during martial law “simply because he criticized President Marcos.”

“[Enrile and I] were discussing the passage of Republic Act [No.] 10368,” said Rosales, a former party-list representative, referring to the law that provides reparations to martial law victims that Enrile himself had signed as Senate President.

“And guess what?” Rosales said. “He kept saying, ‘You were so vocal, that’s why you were arrested.’”

The 84-year-old Pimentel remarked: “I was jailed only four times and ousted from office twice.”

Pimentel was removed from his post as mayor of Cagayan de Oro City and later as a member of the Batasang Pambansa (National Assembly) for opposing the Marcos regime.

Ocampo was imprisoned for over nine years, and Saguisag was detained simply for calling Marcos a “supersubversive” in open court.

“That was how oppressive it was at the time,” Saguisag said.

The four martial law survivors overturned Enrile’s statement that critics of Marcos were merely “inconvenienced,” recounting stories of brutal torture at the hands of the military.

Ocampo said he was forcibly undressed, doused with cold water, and at one point, shoved face-first into a toilet bowl.

He was also sadistically electrocuted — from his forehead all the way down to his genitals.

His torturer, then Lt. Rodolfo Aguinaldo, removed Ocampo’s blindfold in the middle of the ordeal and said: “Look into my eyes, I’m here to give you hell.”

Rosales, despite the decades that passed, still remembered how her body trembled as she was stripped naked, covered in melted wax and molested by soldiers, who threw her onto a mattress and mocked her by playing nationalist songs.

Right side of history

“They did it to dehumanize and destroy me,” Rosales said.

The former CHR chair accused Enrile of merely going with the political winds, as he had been both a top architect of martial law as Marcos’ defense chief who broke with the dictator in a failed power grab that led to the 1986 Edsa People Power Revolution.

“Mr. Enrile unfortunately does not seem to know when to take the right side of history,” Rosales said.

Saguisag added: “You can tell when [Bongbong Marcos and Enrile] lie — their lips move.”

The Marcos-Enrile conversation, set up like an interview in an empty theater and released on social media in time for the 46th commemoration of the declaration of martial law, had clearly incensed Saguisag and the others, who are still grappling with the long-term effects of their ordeal during the dictatorship.

According to Pimentel, Marcos’ various infrastructure projects that are still standing today and are touted by his supporters as proof that he ushered in a “golden age,” could not “cover [the] multitude of sins” under his regime.

“We could have had a President (Jose) Diokno, (Jovito) Salonga, (Benigno “Ninoy”) Aquino, down the line,” said the former senator, who name-checked other opposition icons during the era. “[They] should have been our governors and congressmen today, instead of the great pretenders we have.”

Looking forward, Saguisag aired an ominous warning—if Bongbong Marcos were to be elected President, that would mean “all our efforts, all our lives, were totally wasted.”

“That would really be a dreadful possibility,” he said. “Forget the past and you will be condemned to repeat it.”

Read Next
5,000 residents threatened by rock slides on Mt. Arayat
EDITORS' PICK
Finding your dream home is now easier with RLC Residences
NCR under GCQ ‘subject to heightened & additional restrictions’ until August 5; no dine-in
Duterte recalls decision to junk VFA after meeting with top US official
MVP Group mounts unprecedented vaccination drive for 60,000-strong workforce
Metro Manila under ECQ from August 6 to 20
Nintendo Switch new model – Nintendo Switch OLED is coming!
MOST READ
Metro Manila under ECQ from August 6 to 20
Eumir Marcial eyes repeat vs fellow pro Darchinyan for sure Tokyo medal
OVP ‘insulted’ by Trillanes’ claims vs Robredo in meeting with Lacson
Wizards trade Russell Westbrook to Lakers in blockbuster
Don't miss out on the latest news and information.