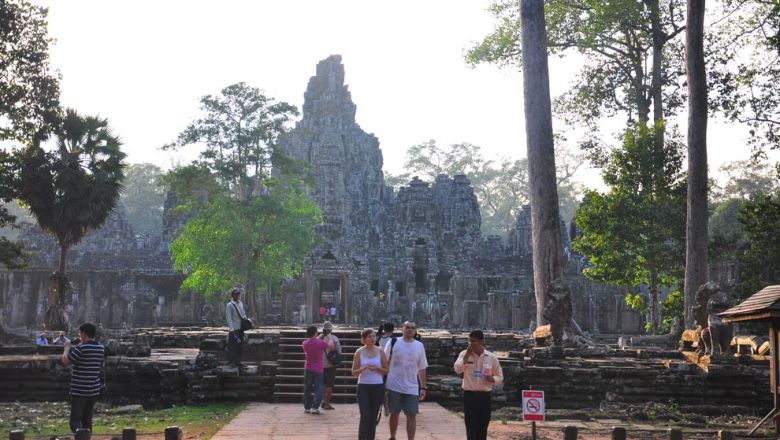 PHNOM PENH — The Japanese and Cambodian governments have allocated $1.5 million to fund phase five of the Bayon temple restoration project, a Unesco official said on Tuesday.

Unesco Culture Programme Specialist Philippe Delanghe told The Post that the project which is slated to begin this year will be completed in 2020. This is according to a mutual agreement signed by the UN agency and the Ministry of Culture and Fine Arts.

The project is backed by the Japanese and Cambodian governments, with each contributed $1 million and $500,000 respectively, he said.

Delanghe said: “The financial contribution is necessary to continue restoration of the Bayon Temple.”

The fifth phase of the project focuses on studying and restoring the central structure of the temple, as well as preserving its sculptures which reflect the people’s daily lives during the great era reigned by Jayavarman VII around the late 12th century.

It has been financing restoration projects via the Japan Trust Fund for the Conservation of Culture World Heritage.

During the implementation of phase three (2005-2011) under the joint framework called Japan-Apsara Safeguarding Angkor (JASA), Japan provided financial support amounting to $3,268,286 in addition to the $500,000 contribution given by the Apsara Authority.

Unesco was responsible for the administrative arrangements for this project.

Phase four of the project, which started in 2011 and finished in 2015, was implemented with a $2.5 million contribution from the Japanese government and $500,000 from the Cambodian one.

A spate of restoration activity by various stakeholders throughout the years led to the uncovering of many buried artefacts and greater understanding of the Khmer empire.

Apsara Authority director-general Sum Mab said the fund will make the process of protecting and conserving the temple easier.

“The contribution indicated a huge participation by the Japanese government in protecting and conserving [Bayon temple] which is part of the Angkor Archaeological Park – a world heritage site.”

He said restoration within the archaeological park is very important, noting that the effort would allow future generations to learn and research the traditions and culture of the ancient empire reflected through the historical structures.

Other than Japan, other countries have also participated in many of the Kingdom’s temple restoration projects.