The Supreme Court dismissed the petition filed by Cebu-based businessman Peter Go Lim to stop the drug probe being conducted anew by the Department of Justice (DOJ) against him.

Lim, in his petition, asked the high court to issue a temporary restraining order against the reinvestigation of his case, which he said was based on allegations that he violated the Comprehensive Dangerous Drugs Act for the sale, administration, dispensation, trading, delivery, and transportation of illegal drugs.

He argued that the complaint against him was dismissed by the DOJ’s panel of investigation last December. Hence,  the reinvestigation order issued by then Justice Secretary Vitaliano Aguirre may be considered a grave abuse of discretion.

Aguirre, however, created a second panel of prosecutors to reinvestigate the case where the police was given the opportunity to substantiate their allegation against Lim, self-confessed drug distributor Kerwin Espinosa, convicted drug lord Peter Co, and several others.

“The Court resolves to dismiss the petition for failure to show any grave abuse of discretion in rendering the challenged order and resolution which, on the contrary, appear to be in accord with the facts and the applicable law and jurisprudence,” the high court’s Third Division stated in its resolution.

The DOJ has since terminated its reinvestigation and two counts of drug cases have been filed against Lim before the Makati City Regional Trial Court.

A warrant for his arrest has  been issued, but authorities are still trying to find him at the moment. /ee

READ: P500K reward up for arrest of businessman Peter Lim 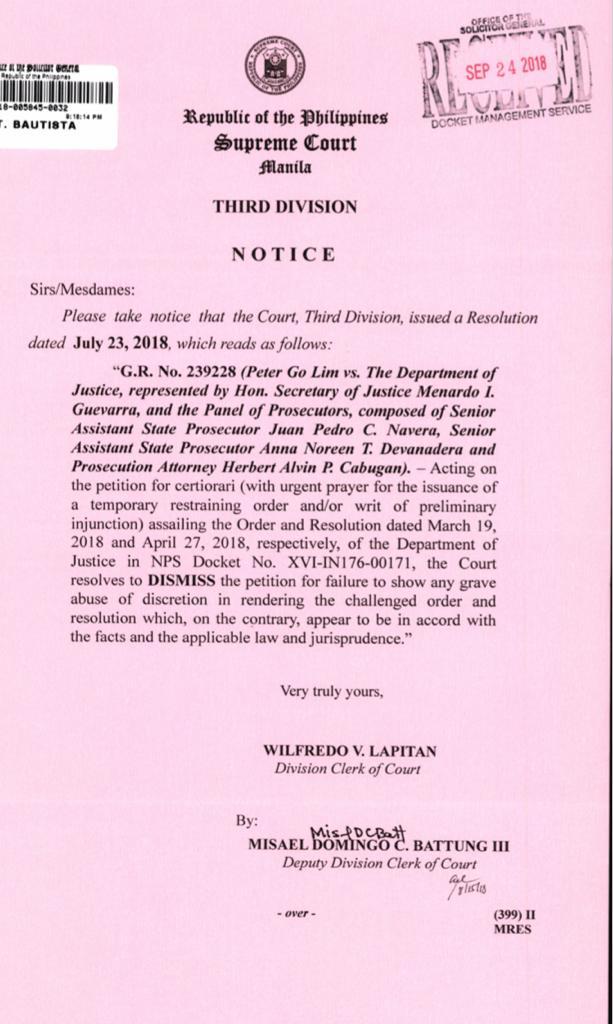