Over 400 killed in a month in drug war–gov’t 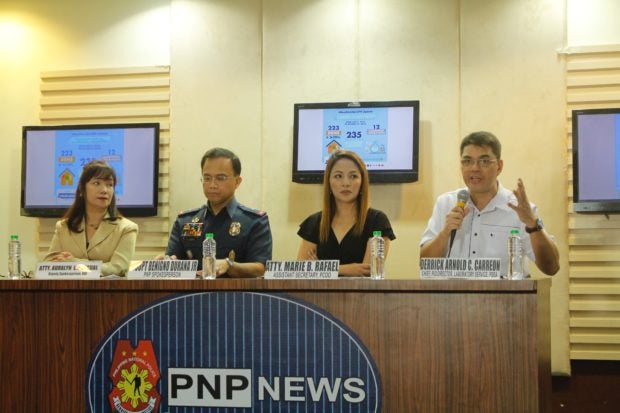 More than 400 drug suspects have been killed in legitimate anti-drug operations in just over a month, as per data from the latest 2019 Real Numbers PH that was released on Wednesday.

According to a report by the spokespersons of the Philippine National Police (PNP), Philippine Drug Enforcement Agency (PDEA), National Bureau of Investigation (NBI), and the Presidential Communications Operations Office (PCOO), the drug war death toll from July 1, 2016 to August 31, 2018 is now at 4,854.

Aside from this, the data also revealed that 155,193 suspects were arrested in the operations, 247 of which are elected officials, 271 are government employees, and 58 are uniformed personnel.

For government workers, 279 have been dismissed from service for drug use, 267 of which belong to the PNP.  Another 105 were removed for drug-related offenses, where 89 are police personnel.

On the other hand, an additional 223 illegal drug dens and 12 clandestine drug laboratories have been dismantled. An additional P2.64 billion worth of drugs, chemicals and laboratory equipments were seized in the past month, while shabu with an estimated value of P2.60 billion were recovered.

There were also 8,444 barangays nationwide cleared of illegal drugs.

Despite the staggering numbers, PNP Spokesperson Chief Supt. Benigno Durana and PDEA Spokesperson Derrick Carreon said that the drug war is still far from over.

“We’ll take off from the president’s statements that the war on drugs is far from over,” Durana said. /jpv

PDEA: Drug trade in PH alive due to absence of death penalty, corruption