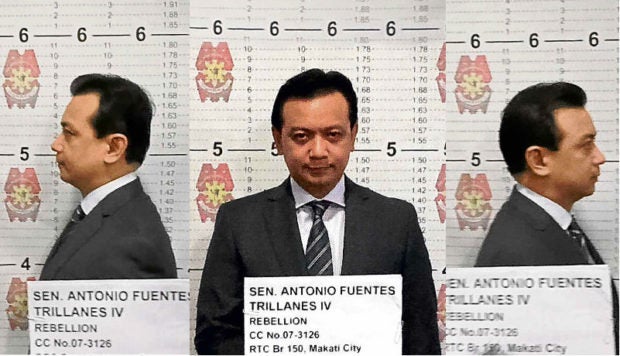 BOOKED Sen. Antonio Trillanes IV gets his photos taken at the Makati City Police Station after a local court ordered his arrest on revived rebellion charges on Tuesday. —PHOTOS COURTESY OF NCRPO

“Officially, we have no democracy. This case goes beyond me,” Trillanes told reporters.

Judge Elmo Alameda of Makati RTC Branch 150 issued a warrant for the arrest of Trillanes a day after the senator submitted an affidavit of a military officer attesting to the former military rebel’s filing an application for amnesty in 2011 and admission of guilt in taking part in attempts to overthrow the government in 2003, 2006 and 2007.

The affidavit of Col. Josefa Berbigal, head of the secretariat of the temporary amnesty committee of the Department of National Defense (DND) that processed the applications of military rebels for amnesty in 2011, belied the claim of President Rodrigo Duterte that his fiercest critic in Congress did not apply for amnesty nor admit guilt.

For those reasons rebutted by Berbigal, the President on Aug. 31 voided the amnesty granted to Trillanes and ordered the revival of the coup d’état and rebellion charges against the senator.

His order set off a controversy that, together with rising inflation and a shortage of low-priced rice, pulled down his approval and trust ratings.

But Judge Alameda, in his order to arrest Trillanes, said the senator “failed to present the original hard copy, a duplicate copy or even a photocopy showing that he personally accomplished and filed” an application for amnesty.

Earlier, Trillanes showed pictures of himself holding the accomplished application form for news photographers as he applied for amnesty at the DND on Jan. 5, 2011.

Former Defense Undersecretary Honorio Azcueta, the then head of the DND amnesty committee, said on Sept. 9 that Trillanes applied for amnesty, “[t]hat’s why on record he was granted amnesty.”

Trillanes’ application and those of 94 other military mutineers were approved after three weeks.

What happened to his application form is unknown. But after the Office of the Solicitor General had been inquiring about it, the military issued a certification saying there was no copy of the form available.

That certification became the basis for the President’s Proclamation No. 572 voiding Trillanes’ amnesty, which the senator had asked the Supreme Court to declare unconstitutional.

Trillanes had asked Alameda to dismiss the bid of the Department of Justice (DOJ) to revive the rebellion charges against him, but the judge said that because an admission of guilt would have been included on the application form, the lack of a form meant it could “be safely stated here that Senator Trillanes failed to comply with the minimum requirement of expressly admitting his guilt.”

He dismissed the documents submitted by Trillanes as “barren of probative weight to prove [the former military rebel’s] compliance.”

The court, he said, was “morally convinced of the sufficiency and legality of the issuance of Proclamation 572.” 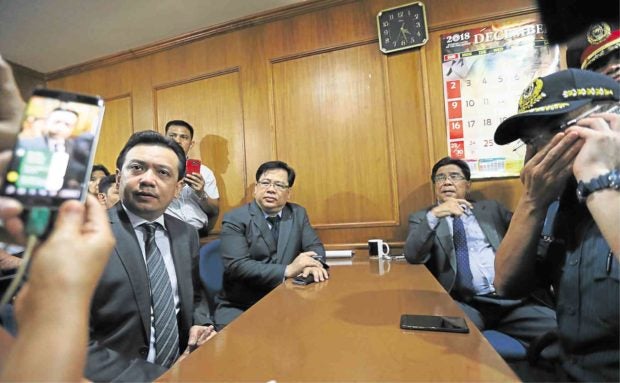 Alameda said the proclamation would remain legal and valid unless the Supreme Court were to decide otherwise.

The judge ordered Trillanes’ arrest and set the bail at P200,000.

Trillanes posted bail in court, accompanied by Senators Francis Pangilinan, Bam Aquino and Risa Hontiveros, after he was booked at the Makati City Police Station.

Trillanes said his arrest was a clear example of the President harassing his critics, “the ones telling the truth who he could not face.”

“For all intents and purposes, darkness and evil prevailed in our country. So whatever happens next is in the hands of the Filipinos,” he said.

“The court has spoken,” countered presidential spokesperson Harry Roque. “Let’s stop the drama by [press conference] and allow the legal process to take its course.”

Trillanes said he decided to go with the arresting team to fulfill his promise that he would honor a warrant of arrest issued by a civilian court, “no matter how unjust that warrant may be.”

He said his arrest had nothing to do with anything except Mr. Duterte’s anger and vindictiveness.

The President has vowed to imprison Trillanes after the senator, during the 2016 presidential election campaign, disclosed what he called secret bank accounts of the then mayor of Davao City that the latter claimed contained hundreds of millions of pesos in unexplained wealth.

Last year, Trillanes linked one of the President’s sons, Paolo Duterte, and his son-in-law, Manses Carpio, to drug smuggling from China and extortion.

Trillanes said he had debunked all the arguments that the Duterte administration had raised to justify the scrapping of his amnesty.

“They forced and twisted the law, which is why democracy and our institutions failed,” he said.

Vice President Leni Robredo, who was in the Senate for a budget hearing when police officers arrived with the arrest warrant, said the arrest of Trillanes was a sad development.

“We feel that dissent is important in a healthy democracy. We should give space for dissenting views,” Robredo said.

Hontiveros described Trillanes’ arrest as a “blackeye for democracy.”

Aquino called on the Duterte administration to stop intimidating and attempting to scare its critics.

Sen. Grace Poe said that if Trillanes’ amnesty could be questioned, all other amnesty grants would be in peril as well.

“So how can there be trust?” Poe said.

“With the issuance of the warrant of arrest against Senator Trillanes, the pretensions of the Duterte administration that we are still in a democracy has been removed. We are in a dictatorship now,” Alejano said.

Albay Rep. Edcel Lagman said that instead of issuing a warrant of arrest, the lower court should have reported the results of its “fact-finding” to the Supreme Court, which is hearing Trillanes’ challenge to the legality of Proclamation 572.

For Justice Secretary Menardo Guevarra, however, the order to arrest Trillanes was significant, as it showed “the court’s recognition that the rebellion case is still alive.”

The DOJ has also asked Makati RTC Branch 148 to reopen the coup d’état case and order the arrest of Trillanes.

“As it is, we are waiting for a miracle from Branch 148. We’re slightly more hopeful, but we have to expect the worst,” Trillanes said.

“You have to expect the worst because the enemy is the devil,” he added. —With reports from Christine O. Avendaño, Jerome Aning and Vince F. Nonato