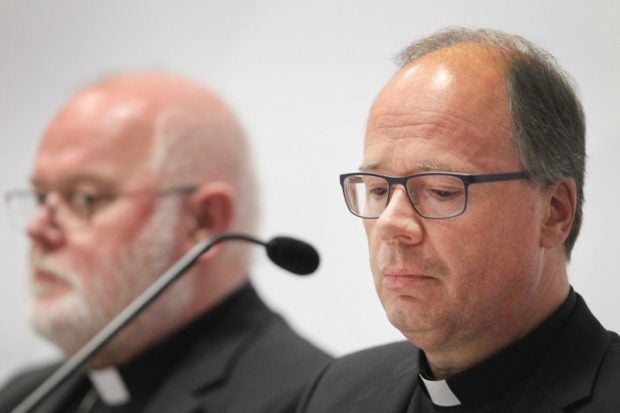 Archbishop of Munich and Chairman of the German Bishops’ Conference and Trier Bishop, Cardinal Reinhard Marx (left), and commissioner for sexual abuse issues in the ecclesiastical sphere, Stephan Ackermann, give a press conference to present the results of the study on “Sexual Abuse of Minors by Catholic Priests, Deacons and Male Religious” (MHG study) on September 25, 2018 in Fulda, western Germany. AFP

FULDA, Germany — Germany’s Catholic Church on Tuesday apologized to victims of sexual assault by clergy, with the institution’s top cardinal saying perpetrators must be brought to justice.

Cardinal Reinhard Marx said he was ashamed over the decades of abuse that have shattered trust, the crimes carried out by officials of the Church, as well as how so many have looked away for so long.

The dismay expressed by the head of the German Bishops’ Conference came as the institution published a damning report showing that in Germany, almost 3,700 minors — mostly boys — were assaulted between 1946 and 2014.

The report’s authors said however that the figure was “the tip of the iceberg” and that the real extent of the problem was far greater.

“I have to say very clearly that sexual abuse is a crime. Those who are guilty must be punished,” said Cardinal Marx.

“For all the failures and for all the pain, as chairman of Germany’s Bishops Conference, I apologize. I also apologize on a personal basis.

“We are not done with confronting the incidents and consequences, it begins now,” he stressed at a press conference.

Victims have criticized the report for falling short of what is needed to flush out perpetrators.

They urged the Church to bring in independent experts for a thorough audit, adding that victims should be offered compensation.

“The system of abuse, transfers (of offending priests) and cover-ups cannot be mapped out” by a study that had access only to available personnel documents, said the victims’ association Eckiger Tisch.

“We are not given names of perpetrators. There are no names given of the responsible bishops who have perfected the system of covering up sexual attacks over decades.”

Justice Minister Katarina Barley also urged the Church to “take responsibility for decades of concealment, cover-ups and denials” and to work with state prosecutors to bring every known case to justice.

The independent commissioner for child sex abuse issues, Johannes-Wilhelm Roerig, recommended state authorities step in to clear up the crimes and ensure victims get access to Church files and compensation.

The state “has a duty of care for all children, including those who are in the care of the Church,” he told the Sueddeutsche newspaper.

According to the study, 1,670 clergymen in Germany committed some form of sexual attack against 3,677 minors, mostly boys, between 1946 and 2014, intimidating their victims into keeping quiet.

More than half of the victims were 13 years old or younger, the study concluded, after examining 38,000 documents from the 27 German dioceses.

Researchers from three universities who carried out the survey warned that the true scale of the abuse was far greater, as many documents had been “destroyed or manipulated”.

Predator priests were often transferred to another parish, which was not warned about their criminal history.
Only about one in three were subject to disciplinary hearings by the Church, and most got away with minimal punishment. Only 38 percent were prosecuted by civil courts.

The research is the latest in a series of reports on sexual crimes and cover-ups worldwide spanning decades that has shaken the Catholic Church.

Pope Francis has found himself embroiled after conservative US Archbishop Carlo Maria Vigano claimed the pontiff had himself ignored abuse allegations against prominent US cardinal Theodore McCarrick for five years.
Francis has so far refused to respond to the allegations.

He has however announced a Vatican meeting of national Church leaders on the protection of minors, for February 2019.

Joerg Schuh of the Berlin-based Tauwetter centre for victims of sexual abuse told AFP TV that “the Catholic Church has a global problem”.

“I would like the Pope to make it his number one topic, and for his Church to really work on it,” he said.
Major abuse cases in Germany have included a Berlin elite Jesuit school and the world-famous Catholic choir school the Regensburger Domspatzen where more than 500 boys suffered  sexual or physical abuse. /ee

Read Next
Esperon: Democracy is alive, due process followed in Trillanes arrest
EDITORS' PICK
Smart 5G goes live
Water remains our saving grace right now
PNP: Checkpoints back in MECQ areas
Been there, done that but what’s the difference between MECQ and GCQ?
BREAKING: 3,226 latest COVID-19 cases bring PH’s total to 106,330
A gem of a residence in the new normal
MOST READ
MECQ guidelines in infographics
Doctors group to Duterte: ‘There was never a call for a revolt’
MECQ in NCR, other areas: Mass transportation suspended, quarantine pass required anew
Duterte heeds frontliners’ plea, reimposes MECQ in Metro Manila, other areas Aug. 4 -18
Don't miss out on the latest news and information.