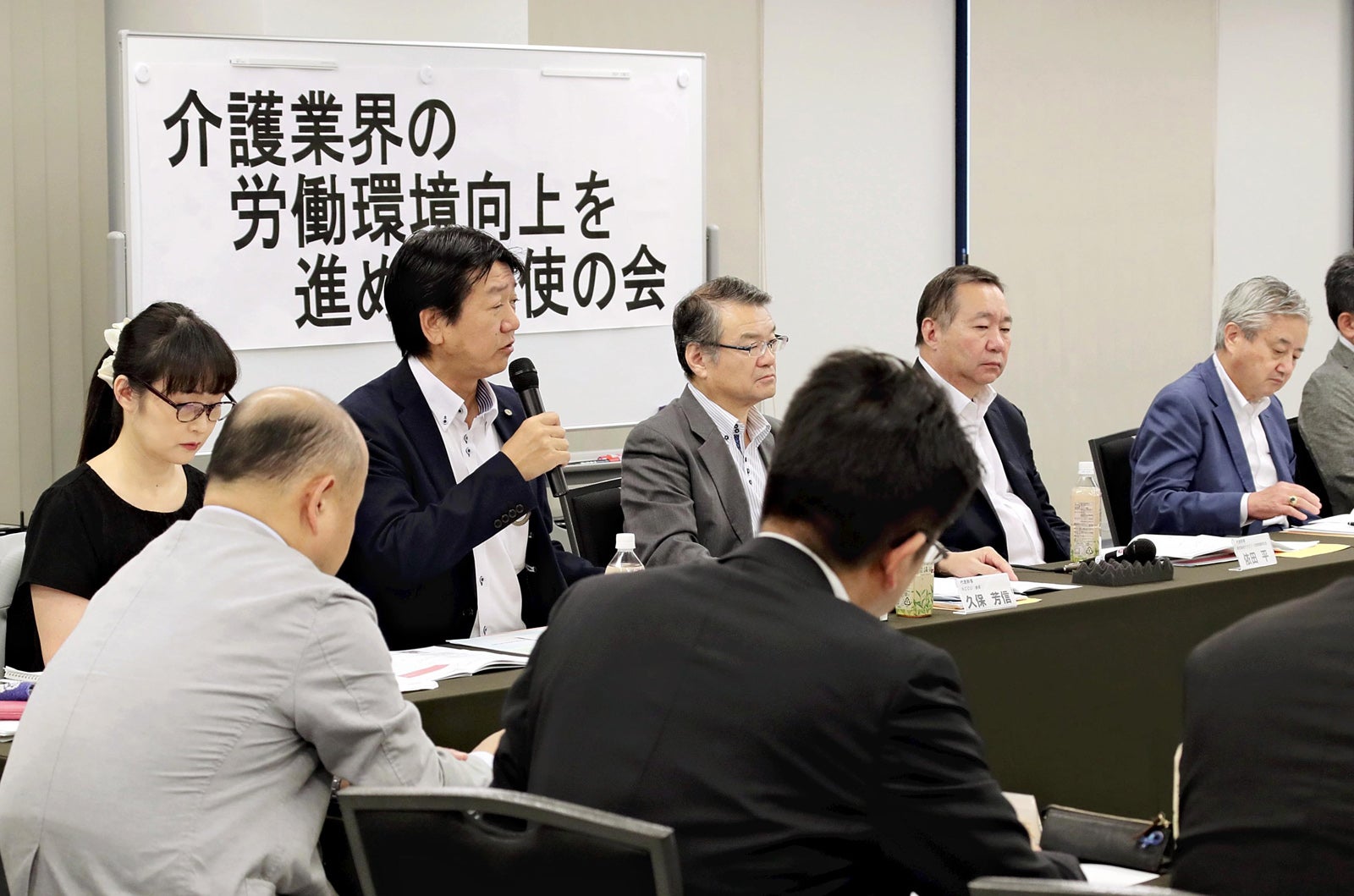 A labor-management meeting discusses how to deal with issues such as sexual harassment of nursing care workers in Kobe on Saturday. THE JAPAN NEWS/ASIA NEWS NETWORK

TOKYO — Harassment of nursing care workers — including sexual harassment and verbal abuse from the people under their care and care recipients’ family members — is becoming a serious problem. The industry is becoming increasingly concerned that such adverse workplace environments will make the acute labor shortage even worse.

The situation has led the Health, Labor and Welfare Ministry to begin taking countermeasures, such as deciding to conduct its first-ever fact-finding survey on the issue.

In the opening address of a labor-management consultation in Kobe on Saturday, Yoshinobu Kubo, chairman of Nippon Careservice Craft Union, one of the industry’s largest labor unions with about 80,000 members, expressed a strong sense of the crisis: “At this meeting, I want to just discuss how to prevent harassment,” he said.

At the meeting, labor and management representatives agreed to create systems for workers to learn how to appropriately deal with sexual harassment and other abuses by people under their care and others, and to implement such measures as providing mental care services for workers who have been harassed.

Their goal is to conclude a labor-management agreement on these initiatives with about 60 corporations in the industry nationwide by the end of the fiscal year.

Harassment issues are “a factor contributing to the nursing care worker shortage, and we will quickly create manuals and training systems to improve” the situation, Kubo said.

According to a survey conducted by the union on its members, comprising 2,411 workers in nursing care and other positions, 74 percent of respondents had experienced harassment in their jobs, such as during home visits. About 70 percent had been subjected to abuses, while about 30 percent had experienced sexual harassment.

A 62-year-old woman who works for a Tokyo home-visit care provider said she will never forget an incident with a man in his 70s under her care who commanded her to wash his groin while she was assisting him in the bath.

The man could use his arms, so she refused and told him to wash the area himself, but he would not listen. When she finally agreed to wash the area with a towel, he told her to use her hand and “clean it some more.”

“I can handle that kind of situation from time to time, but those words will stay with me forever. An awful feeling comes back to me every time I have to help someone bathe,” she said.

She also said she has coworkers who have complained of physical ailments such as stomach pain and being unable to sleep well because of nightmares about their experiences with people under their care.

Kansai Medical University Prof. Akiko Miki, an expert in psychiatric nursing, said: “Caregivers are often alone in rooms with people under their care when providing services. This is the kind of environment in which harassment is likely to occur.”

Nursing care often involves situations in which physical contact is necessary, such as during bathing or when helping someone to move. Nearly 90 percent of nursing care workers are women, according to the Health, Labor and Welfare Ministry and other sources.

Behind these harassment cases also lies a lack of knowledge about nursing care insurance. Insurance covers a limited range of services, and nursing care workers can provide only certain services based on their contracts. However, some people, including those being cared for and their family members, sometimes view nursing care workers as servants who are available to do anything.

There are reports of people asking caregivers to buy pet food, water gardens and other activities outside of their contracted services, then getting angry if the requests are rejected.

However, nursing care businesses can have a hard time dealing with situations because canceling a contract would have a direct impact on the lives of a person in need of care. Ministerial ordinances forbid companies from refusing to provide services without a valid reason.

Voices from the industry are growing stronger, calling for making harassment a valid reason for refusing to provide services.

The central government has also started to look into the problem of harassment of nursing care workers.

The labor ministry plans to conduct its first-ever fact-finding survey into harassment in the nursing care industry this fiscal year. It also intends to create a policy manual for service providers by the end of the fiscal year.

Some businesses and local governments have already started addressing the issue. The Hyogo prefectural government began subsidizing home visits by multiple caregivers this year. Having teams of two people provide nursing care is an effective means for preventing harassment, but people often refuse the offer because of the increased fee.

The Hyogo program subsidizes a set amount for each visit, with the prefecture, municipality and companies paying one-third each. A consultation office has also been created so nurses have somewhere to go if they experience harassment.

Tokyo-based Sompo Care Inc., a major nursing care provider, has a special department to deal with harassment and other related issues. It has teams that include nursing care workers, doctors and legal specialists. When an issue arises, a female staff member is sent to interview the parties involved and discuss solutions suitable to the specific situation.

Managers of nursing care providers are said to share a deeply embedded view that not refusing services is the way they contribute to society. But the head of the company’s support department said, “It’s the duty of managers to protect the working environment of their staff.”

Nevertheless, many small enterprises are just getting by with a few members of staff, and have little room to implement extra policies.

Yoshikatsu Shinozaki, associate professor of nursing care labor studies at Josai International University, said: “It’s important to educate managers as some still think that even if they receive a complaint [from staff], they can simply shrug it off. The central and local governments also need to work [to implement measures] such as setting up consultation offices.”