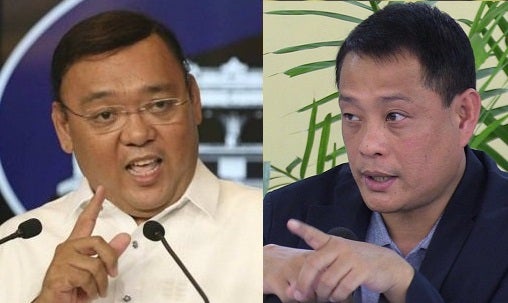 Presidential Spokesperson Harry Roque (left) said he would file technical malversation charges if no one else would file it for creating a “mess” in the NFA and the country’s rice supply. INQUIRER FILE PHOTOS

Roque said he was willing to file charges against Aquino if no one would intend to file a case against the NFA official.

He said Aquino was guilty of technical malversation after a Commission on Audit (COA)  report showed he did not use the NFA’s budget to buy buffer stock from local producers.

(What I’m saying: If noe one wants to file a case, I will be the one to file it. And not only for technical malversation, I will also file graft. Because causing injury to the public and to the government is also a graft.)

(And because he did not spend the money to buy rice from the local farmers for our buffer stock, we are importing rice and giving out money to foreign farmers.)

(So, this is not just technical malversation that I will file against him if no one wants to file a case, I will file graft and corruption as well. I will file a lot more.)

The Palace official said he wanted Aquino to be in jail.

(Technical malversation has a mild penalty. What I want is a case that has a longer prison term.)

Roque vowed to look into the case of Aquino.

“I have not accused him of actual financial graft because I do not know. However, I promise to look into it soon,” he said.

Asked if the President shares the same position, Roque said, “probably not, but this has been confirmed by the Commission on Audit.”

President Rodrigo Duterte had earlier said Aquino asked him to be relieved as NFA administrator becuase he was already “tired” and could not cope up with the dynamics in the agency. /jpv