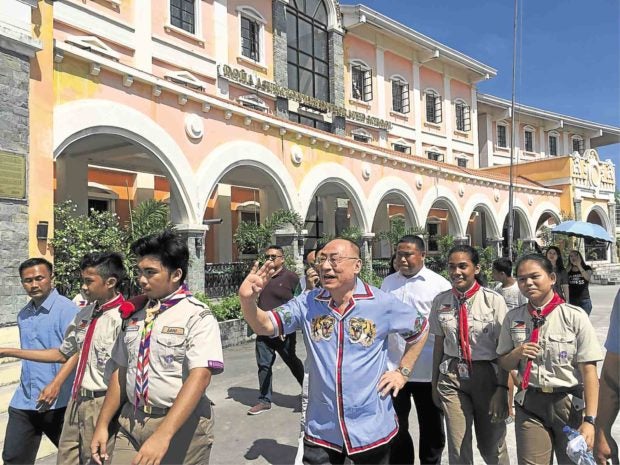 REACHING OUT Realtor Delfin Lee (center), who is linked to a housing scam that state auditors uncovered in 2010, has reached out to Pag-Ibig Fund officials to help the community that his firm developed in Mabalacat City, Pampanga. —ALLAN MACATUNO

Lee, president of Globe Asiatique Realty Holdings Corp., visited the Xevera housing community here eight years after he was indicted and detained for the alleged housing scam worth P7 billion that state auditors uncovered in 2010.

Lee was released after posting a P120,000 bail on Sept. 20, after the Supreme Court downgraded his case of syndicated estafa to simple estafa, said his counsel, lawyer Rony Garay.

“It’s time for rebuilding and for moving on. Let’s rebuild this community,” Lee said as he asked Pag-Ibig Fund officials to sit down with him to patch things up.

“We’re not enemies. My main concern now is to address the real issues for the benefit of the homeowners,” Lee said at a press conference here on Monday.

The Xevera housing project here is among the properties that Globe Asiatique developed in 2010.

Lee was charged with supposedly using ghost Pag-Ibig members to get P7 billion from the state housing agency for housing development, which his firm undertook in Mabalacat and Bacolor from 2008 to 2011.

He was also charged with allegedly reselling housing units that had already been sold.

Lee maintained his innocence, saying he would be willing to go back to jail “if someone can prove that a double sale took place.”

“No one has claimed the disputed units from homeowners who have been staying there in the last eight years,” he said.

He said: “This is not a housing scam. I never imagined even in my wildest dreams that I would end up in jail because of this [housing project].”

According to Lee, he developed Xevera as “a community where we bring the government closer to the people and we provide free education.”

“How could this be a scam? I even named the school we built here after my mother who passed away three months after it was launched,” he said, referring to Doña Asuncion Lee Integrated School inside Xevera.

“It’s time to untangle,” he said. “Our homeowners are in limbo [since the scandal erupted]. I don’t know how many of these [homeowners] are still paying [their mortgages].”

Lee received a warm welcome from some local officials and members of Xevera Mabalacat Homeowners Association.

He was met here by Mabalacat City Mayor Crisostomo Garbo and was the guest of honor at the flag-raising ceremony at City Hall.

“This is a good opportunity for him (Lee) to address all the issues,” Timpug told the Inquirer.

Choock Santos, the homeowners’ association president, said Lee had no other intention but to provide a “decent lifestyle” for the residents in Xevera.

“It’s unfair to throw all these allegations against him (Lee),” Santos said.

Lee said he had not returned home to his family since he was freed on Thursday. “I wanted to come here before I go back to my family … I feel it’s my moral obligation to see them and the changes here (Xevera),” he said.