At UN, Trump calls for global action on drugs 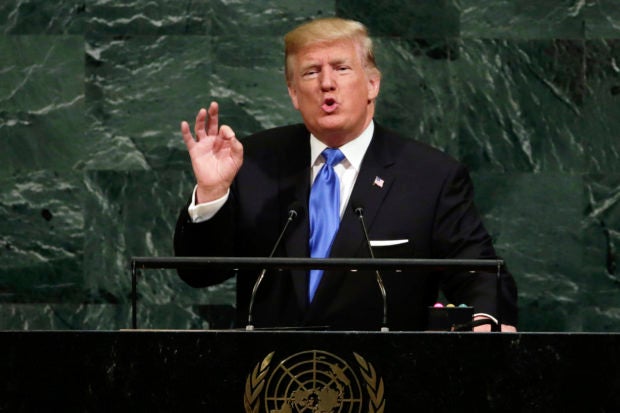 In this Sept. 19, 2017 file photo, U.S. President Donald Trump addresses the 72nd session of the United Nations General Assembly, at U.N. headquarters. Trump will be joined by other populist leaders at the 73rd General Assembly, including Poland’s President Andrej Duda and Italy’s Prime Minister Giuseppe Conte along with the foreign ministers of Hungary and Austria. (AP Photo/Richard Drew, File)

BRIDGEWATER, N.J. — President Donald Trump is at the United Nations for his second general assembly meeting with world leaders since taking office and has participated in a counter-narcotics event. He’s calling for global action to address the illegal movement and abuse of drugs.

The United States in sponsoring the U.N. Global Call to Action on the World Drug Problem, which includes signatures from 130 U.N. member states pledging to do more to combat the global drug trade.

Trump said Monday, “The scourge of drug addiction continues to claim too many lives in the United States and nations around the world.”

“Today we commit to fighting the drug epidemic together,” he added.

As he started the sequel to his stormy United Nations debut, Trump confronted anew the dangers posed by North Korea’s nuclear threat, though its shadow may appear somewhat less ominous than a year ago.

Twelve months after Trump stood at the rostrum of the U.N. General Assembly and derided North Korea’s Kim Jong Un as “Rocket Man,” the push to denuclearize the Korean Peninsula is a work in progress, although fears of war have given way to dreams of rapprochement.

Trump, whose bellicose denunciations of Pyongyang have largely given way to hopeful notes, plans to sit down with South Korean President Moon Jae-in, who comes bearing a personal message to the US leader from North Korea’s Kim after their inter-Korean talks last week.  /kga