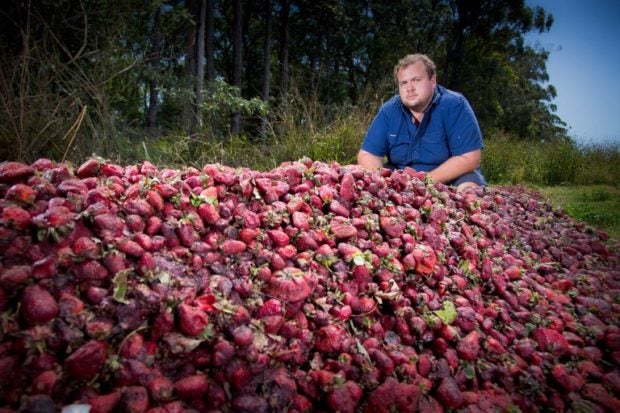 Braetop Berries strawberry farmer Aidan Young poses amid strawberries he will destroy following the nationwide needle scare, on his farm in the Glass House Mountains in Queensland on September 20, 2018. / AFP PHOTO / Patrick HAMILTON

WELLINGTON — The Australian strawberry scare has spread to New Zealand with a supermarket chain announcing Sunday that needles were found in a box of the fruit sourced from the neighbouring country.

The Countdown supermarket chain said it had taken a brand of Australian strawberries off the shelves after a sabotaged punnet — a plastic box — was sold in an Auckland store.

The strawberries, from Western Australia state, were sold in Countdown stores nationwide last week and only one incident of tampering was reported.

“We take food safety very seriously,” the company said in a statement, adding it was in touch with authorities investigating incidents of needles found in strawberries in Australia in recent weeks.

“Customers can return any Choice brand of strawberries they may have at home to Countdown for peace of mind and a full refund.”

Countdown advised customers to cut up any Australian strawberries before eating them.

The statement said there have been no reports of any illness or injury in New Zealand.

It added that the brand of strawberries affected by this withdrawal “have not previously had any issues of this nature reported and had not been withdrawn from sale in Australia”.

In Australia, more than 100 alleged incidents of pins and needles found in fruit have been reported since the scare began in Queensland state earlier this month.

Most are thought to be pranks or jokes on social media, but at least two minors have been questioned by police for carrying out hoaxes.

Woolworths Australia, Countdown’s parent company, has withdrawn needles from sale as a “precautionary step” as police hunt for the original culprit amid a spate of copycat episodes.

The Australian government last week raised the maximum prison sentence for fruit tampering from 10 to 15 years.