Trillanes’ fate in the hands of 2 RTC judges

The judges have ordered a series of hearings to allow Sen. Antonio Trillanes IV due process, but can they stand up to pressure from officials intent on seeing the outspoken Duterte critic in jail?
By: Dexter Cabalza - Reporter / @dexcabalzaINQ
Philippine Daily Inquirer / 05:24 AM September 23, 2018 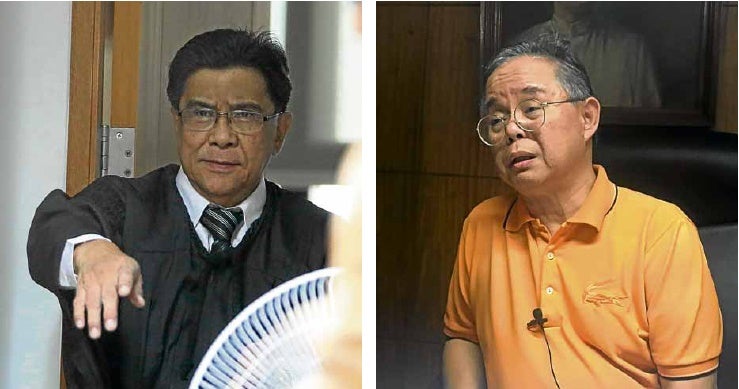 It normally takes some 30 days for the court to resolve a motion, but a judge may do it within a shorter period, depending on the urgency of a case.

Makati Regional Trial Court (RTC) Judges Andres Soriano and Elmo Alameda faced this scenario when state prosecutors trooped to their respective sala earlier this month after the Supreme Court threw back to the local courts the petition of Sen. Antonio Trillanes IV for a temporary restraining order on the arrest order issued by President Duterte.

Mr. Duterte issued Proclamation No. 572 revoking Trillanes’ amnesty that was granted in 2010 by then President Benigno Aquino III, and ordering the military to arrest his vocal critic for his role in the 2003 Oakwood mutiny and the 2007 Manila Peninsula siege. The proclamation was dated Aug. 31 but made public through its publication in a newspaper on Sept. 4.

The President later backtracked and said he would defer to the courts.

The Department of Justice (DOJ) filed separate motions asking Soriano and Alameda to order the senator’s immediate arrest. But instead, the RTC judges ordered a series of hearings to allow Trillanes and the state prosecutors to present their respective sides.

Unlike most judges who let their decisions do the talking, Makati RTC Branch 148 Judge Soriano welcomed reporters to his office and granted them long interviews a day after the DOJ filed its motion on Sept. 4.

Instead of granting the DOJ’s request for a warrant of arrest or a hold departure order against Trillanes on Thursday’s hearing, the 62-year-old judge gave the senator’s lawyers 10 days to comment on the DOJ motion, and the prosecutors five days to file their rejoinder.

During his interview with the media, Soriano acknowledged that the rebellion case against Trillanes and the Magdalo group in the Oakwood mutiny had been dismissed on Sept. 21, 2011, by then acting Judge Ma. Rita Sarabia following the amnesty granted them by President Aquino.

But Soriano convicted of coup d’etat in 2013 First Lieutenants Lawrence San Juan and Rex Bolo, two of the Magdalo soldiers who did not avail themselves of the amnesty. The Court of Appeals (CA), however, cleared the two of the charge in April 2015.

Soriano also ignored the pronouncement of Justice Secretary Menardo Guevarra, his junior by two years at Ateneo Law School, that the government’s application for an alias warrant no longer needs a hearing.

Soriano, who was appointed Makati RTC judge on March 27, 2012, by Aquino, heard the case of San Juan and Bolo upon his appointment.

Among those convicted by the Makati judge was Franklin Meneses, president of the IT firm Cytronics International Inc., whom he found guilty in 2016 of failing to remit his employees’ contributions to the Social Security System.

Before being appointed to the Makati court, Soriano was the presiding judge of Malolos RTC Branch 13 in Bulacan, where his conviction of quadriplegic Ronald Quesada for the rape of a 15-year-old drew criticism, including from Inquirer columnist Ramon Tulfo. The columnist called the judge “utak-biya” (having the brains of a fish) for his 2006 Quesada verdict, but the appellate court affirmed Soriano’s decision in December 2007.

Soriano had been a contender for a number of judicial posts.

In 2010, he vied for the position of Supreme Court administrator, which eventually went to Midas Marquez.  He was also shortlisted by the Judicial and Bar Council as a Sandiganbayan justice in 2014, a post that eventually went to Manila RTC Judge Ma. Theresa Dolores Gomez-Estoesta. In 2015, he was among the nominees for the CA, but lost to fellow Makati RTC judge, Perpetua Atal-Paño.

Before joining the government, Soriano worked as an affiliate of the Puno, Puno & Carlos law firm from 1986 to 1989.

Meeting Trillanes in court was bound to stir feelings of deja vu in Makati RTC Judge Alameda, who previously handled the rebellion case against the former mutineer in connection with the 2007 Manila Peninsula siege.

Unlike Soriano, Alameda did not entertain media interviews when the DOJ prosecutors filed on Sept. 7 their very urgent motion for the issuance of an arrest warrant against Trillanes. The judge stepped out of his office briefly to assure journalists that he would rule on the matter on Sept. 10.

But on that day, Alameda, just like Soriano, did not order Trillanes’ arrest and instead  scheduled a hearing so as  “not [to] prejudice the [senator’s] right to due process.”

Before the Trillanes case, the 67-year-old judge presided over several high-profile trials.

In April 2015, he convicted alleged pork barrel scam mastermind Janet Lim-Napoles and her brother, Reynald Lim, for illegally detaining whistleblower Benhur Luy in a building in Taguig, and sentenced them to “reclusion pepetua,” or a prison term of up to 40 years.

The CA, however, overturned Alameda’s ruling, although Napoles remains at the Correctional Institute for Women in Mandaluyong for her plunder cases before the Sandiganbayan.

In January 2009, Alameda convicted former Batangas Gov. Jose Antonio Leviste of homicide over the death of his longtime aide, Rafael de las Alas. The judge downgraded the original charge of murder, citing the weak evidence presented by the prosecution. His decision was upheld by the CA in May 2010.

Alameda was heavily criticized for granting bail to those charged with supposedly nonbailable offenses, including Leviste and Trillanes in 2010.  The senator, however, was denied bail by then Judge Oscar Pimentel of Makati RTC Branch 148, who was hearing his separate rebellion case.

It was also Alameda who issued the search warrant allowing the Makati police to raid Time in Manila bar on Aug. 16, after police alleged that the place was being used as a drug den. The search became controversial when the antidrug operatives arrested the lawyers representing one of the bar owners for allegedly intimidating them.

Before being assigned to the Makati RTC in February 2015, Alameda was the presiding judge of the Tuguegarao RTC Branch 5.

The University of the East alumnus served as a prosecutor for 16 years and has been a judge for more than a decade, according to the clerk of court. Alameda is set to retire on Jan. 29, 2021.